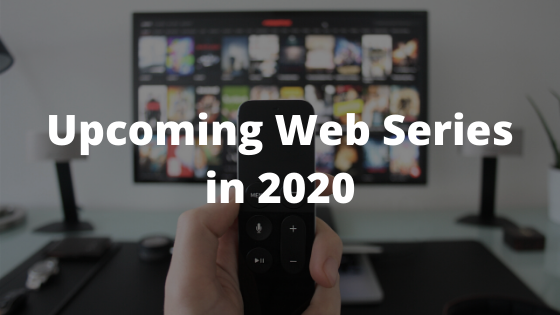 Upcoming Web Series In 2020: All the OTT providers are all set with delicious dishes of entertainment in the race of the market capture. A bunch of web series is in the pipeline with keeping the quality and taste of the audience in mind.

Jamtara: Sabka Number Ayega is an upcoming Web Series In 2020 on Netflix, which is based on real events of cybercrime and phishing taken place in one of the towns of Jharkhand. This upcoming web series is a beautifully presented scenario of the crime hub developed in an uneducated and less privileged society. Jamtara, directed by Soumendra Padhi, is going to be one of the successful Indian crime thrillers in the history of web series. It is expected to be streamed online on 10 January 2020.

A highly anticipated web series from the makers of lust stories, directed by Anurag Kashyap, Zoya Akhtar, and Dibakar Bannerjee, is going to be streamed on Netflix from 1 January 2020. Ghost series will be a masterpiece of 4 correlated stories that are intertwined terrifically. It is Jahnvi Kapoor’s digital debut web series.

Forgotten Army: Azadi Ke Liye is upcoming Web Series In 2020, which is based on historical life events of Subhash Chandra Bose and the story of the Indian National Army on Netflix. It is a digital debut of director Kabir Khan, showing true colors of sacrifice and discipline of Indian freedom fighters in 1942. Sunny Kaushal and Sharvari will play the lead roles in the web series going to be streamed on Republic Day.

There are some web series whose first season was mind-blowing and is expected to be streamed in its next season as an upcoming Web Series In 2020. Whereas some of them will be presented as a whole new web series in 2020. Some of them are as follows:

“The Family man middle-class guy, the world-class spy,” is an Amazon original web series starring Manoj Bajpayee in 2019. After its big success makers, Raj and DK are ready to rock the stage with the second season. The latest addition in this next season, are Samantha Akkineni and Devdarshini. Official dates of the upcoming Web Series In 2020 are announced yet to be announced.

Produced by Ajay Devgn, and starring Kajol, Tanvi Azmi, and Mithila Parkar, Tribhanga is a story revolving around three powerful women. It has created a storm of gossip amongst the audience. When Nyasa has to debut in the film industry, at this age, her mother, Kajol, is doing digital debut by Tribhanga.

Digital debut of Shahrukh Khan as a producer is “Bard of Blood,” a Netflix web series streamed online in 2019. With Emraan Hashmi in the lead role, this spy thriller web series has caught the attention of web series lovers. This upcoming Web Series In 2020 will have Emraan Hashmi, Sobhita Dhulipala, and Vineet Kumar Singh as lead characters.

A red chilies production, class of 83, is a Netflix original web series, which is a digital debut of Boby Deol as the lead role and Shahrukh Khan as a Producer. It is the most awaited upcoming Web Series In 2020.

As exciting as its name, MumBhai is an ALT Balaji web series going to be streamed in 2020. It is a story based on Mumbai and the life of a gangster. It has Angad Bedi and Sikander Kher in a pivotal role. MumBhai is a creation of the production house of Ekta Kapoor. A Picture of star cast with clapper board of MumBhai is released recently on Instagram.