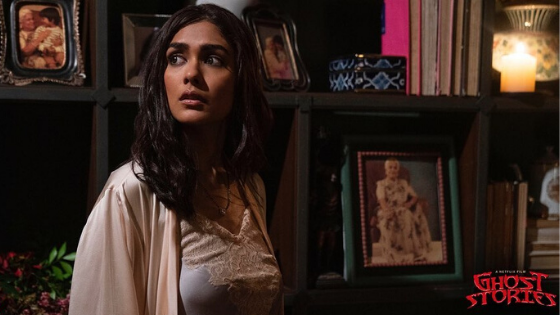 Ghost stories Netflix horror movie, “Your fears will find you”, is a horror movie, starring  Janhvi Kapoor. The first look of the movie in the form of a fearful teaser launched on 6th December 2019. It has breathtakingly crafted four supernatural stories.

After Bombay talkies and lust stories, it is a fear wrapped film directed by Anurag Kashyap, Zoya Akhtar, Karan Johar, and Dibakar Banarjee. While unleashing a beat about the movie, one of the directors said, “It is about the things that are not natural”. Ghost Stories Netflix is one another interlinked combination of four stories just like the previous two. But indifferent and somewhat less touched segment horror.

The release date of Ghost series on Netflix

The web series stream on Jan 1st, 2020 at 12 am IST on Netflix Worldwide. The first day of the new year is selected by the producers to give it a hype.

It is announced as one o the 10 new Netflix original movies in India. The latest trend of OTT is definitely going to capture it and make it viral. The teaser of Ghost Series Netflix is raising the expectations of the audience.

About the Ghost Series Netflix

Ghost Stories Netflix is produced by RSVP, production banner of Ronnie Screwvala, and Ashi Dua Sara of Flying Unicorn Entertainment, a Producer of both of the previous both series Bombay Stories and Lust Stories. While announcing Ghost Stories, Ronnie delivered, “The overwhelming success of Lust stories which still has People talking About it a year after it is launched – made us want to repeat the magic with our second anthology called Ghost Stories. With Netflix, we have a partner who complements the strain in RSVP’s DNA — to lean into risk when it comes to bold content narratives and creative freedom. ”

While directing Ghost Stories, Karan Johar has come up with his new challenging experience regarding the same, “I have always been mortified to watch the horror genre and have always stayed very far away from any ghost story! So to direct one is not only hugely challenging but also exceptionally exciting,”. He adds, “Personally it’s uncharted terrain and I couldn’t have chosen a better platform and a more eclectic collective to exhibit my fear of ghosts and ghost stories! This one’s going to be a nightmare for this dream team,”.

All these news are exciting the hyping environment in horror movie lover. Ghost stories are going to be the third collaboration between Ronnie and RSVP. the star cast of Ghost Series is well- nurtured in the industry to deliver the best in terms of acting.

It is going to be streamed in 151 million members and 190 countries.

Let’s check upon the spin chilling teaser of Ghost Stories and Comment below, how do you feel about it?