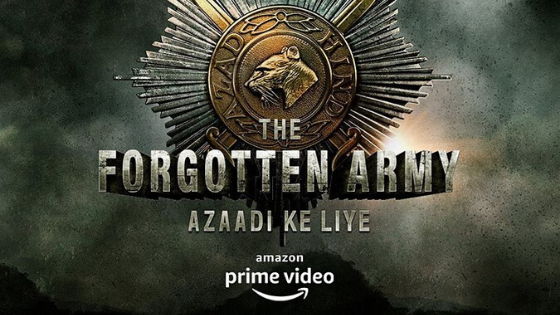 A story on the Indian National Army of Subhash Chandra bose, The Forgotten Army is a war film.  The Forgotten Army– Azadi Ke Liye is a web series produced and directed by Kabir Khan. As it is his debut project, we may have doubts. But, his creations like Phantom, Ek Tha Tiger, and Bajrangi Bhaijan have brightened up his place in Indian cinema.

It is a story of army structured and disciplined by Subhash Chandra Bose in time of world war 2. It is based on the real story of the strategic moves of an army who fought for Indian Independence.

Kabir Khan Announced The Forgotten Army this way, “walking into a new medium with a longstanding dream!! Super excited to present my passion project on Amazon Prime”.

It is going to be stream online from 26th Jan 2020. The poster is released recently and so as the trailer.

Sunny Kaushal (brother of Vicky Kaushal) and Sharvari are the faces going to play the lead role in  The Forgotten Army. Sharvari is also a part of Bunty or Bubbli 2 with Siddharth Chaturvedi.  Directed by Kabir Khan, The Forgotten Army is going to be a web series making aware of many hidden facts that we may have forgotten with time after independence.

Indian National Army known as Azad Hind Fouj is a team of freedom fighters who have gathered and formed an army with discipline and passion for independence under Netaji Subhash Chandra Bose. It is the story of a bunch of people giving a tough fight with “Chalo Delhi”. One of the teasers showing the Indian flag of that time is really mesmerizing.

One of the scenes shows the army in uniform, playing cricket, and at that time they are attacked by the opponents. From then, the story gets twist and turns of their not so easy journey. With bicycles and bags on the back seat, the soldiers give a tough fight. They have weapons like pistols and guns. An airplane is shot by a gun in the scene. The voice of revolver triggering gives the real effect of war on our minds.

The teaser gives a glimpse of Sunny Kaushal and Sharvari.

The Forgotten Army: Azadi Ke Liye series was announced in late 2017 by Kabir Khan only. He has already worked on a documentary of the same type, which gives an idea of his patriotic story narration and his excitement about this project says a lot about what is brewing inside.