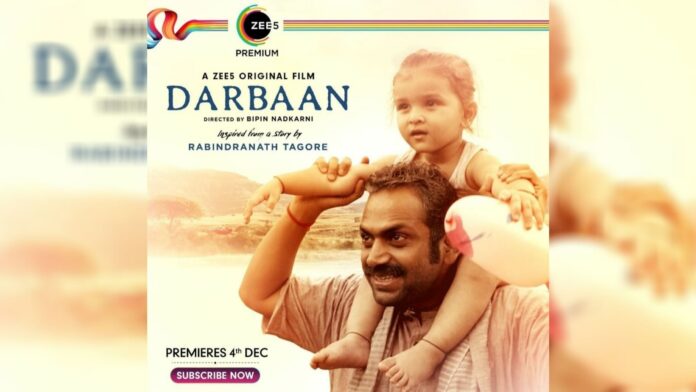 Zee5 has been one of the OTT platforms that have constantly been pushing for better content and storylines for the audiences. Zee5 are to release another excellent content film named “Darbaan” ( guard) which is based on Rabindranath Tagore’s short story and is helmed by the national film award winner Bipin Nadkarni under the banner of Opticus Picture Company with Yogesh Beldar as co-producer..

The story develops on a narrative about an innocent bond of friendship between a rich coal miner’s son ( Anukool) and his caretaker(Raicharan). As the kid turns into an adult,  he gets married and has his own son. Likewise, Raicharan takes care of Anukool’s son as well. Zee5 Darbaan will fathom the bond between the two personalities that transcends any social and economic chasm between them. But, due to certain events, their lives would be changed forever and their relationship would take a turn. It is a story that would cover themes like redemption, guilt,  love, and a faithful bond between a child and his caretaker. In the poster, a  farmer can be seen carrying a child on his back and they both look at something distant.

The film is featuring actors like  Sharib Hashmi, Sharad Kelkar, Rasika Dugal, Flora Saini, and Harsh Chaya in important roles. All of the actors are very experienced and that would make it very exciting for the viewers.

The film will premiere on December 4th on Zee5 platform. One can download the app from play store and watch the movie.