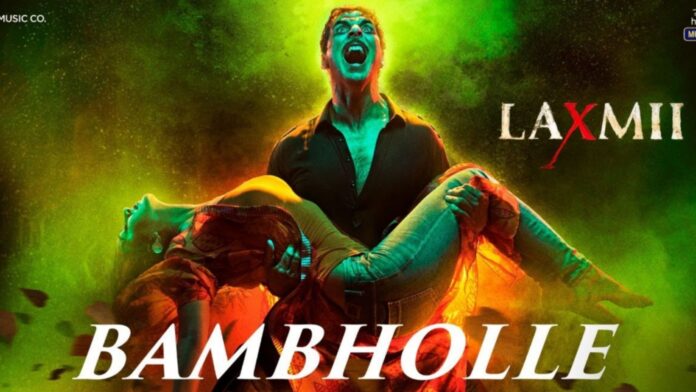 Another song from Laxmmi is out and is already rocking the floor. The song, BamBholle stars the usual cast of the movie, Laxmmi. Featuring Kiara Advani and Akshay Kumar, the song is the second in the queue. Let’s find out what this song hides.

The song has been composed by famous lyricist, Ulluminati. The crooning of the song has been done by Virus. The song is partially a devotional prayer to Lord Shiva. The other part of the song is kind of a dance number. To categorize the song has been made pretty difficult and is an upbeat track. The visual of the song has made it difficult enough to grab the attention of the viewers. Moving with the beat, the actor has contributed a lot of dance steps in the video. It is because of the mentor, Khiladi Kumar, who made it possible to incorporate the rocking performance in the song, BamBholle.

Bollywood actor Akshay Kumar has matched the rhythm in the song while trapped in a saree. One of the most difficult things to execute the fast and wild dance movements in saree, which Akshay Kumar presented effortlessly. It is the most attractive visual of the song, BamBholle. The movie, Laxmmi , is all set to make its release in the coming week. It has been dated November 9, this year. Based on a horror-comedy, the movie has been directed by the director of the movie Kanchana, Raghava Lawrence. The movie is the official Hindi remake of Tamil movie Kanchana, that is backed by Bollywood. The movie has been produced by Tushar Entertainment House, Fox Star Studios, Cape of Good Films, and Shabinaa Entertainment. The fans are eagerly waiting for Laxmmi to hit the floor.