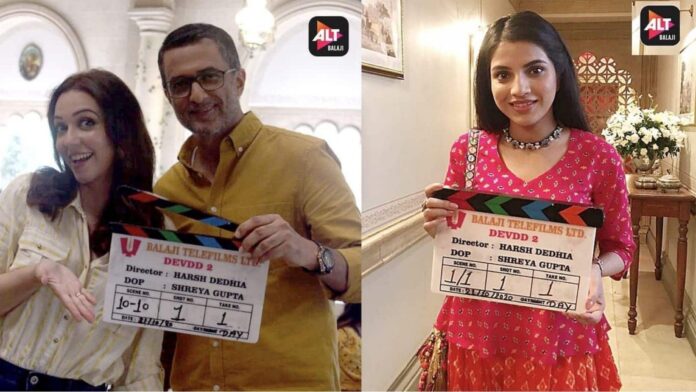 The popular Hindi web series of ALTBalaji Dev DD is all geared up to launch its season 2. The shoot has officially begun now.

ALTBalaji Dev DD season 2, conceptualized and produced by Ekta Kapoor and Shobha Kapoor will stream on the ALT Balaji digital platform soon. Season 2 of Dev DD is expected to receive the same or even more love from the audience than it got for season 1.

“Once again, things are about to get wilder than your imagination…😎 #DevDD, season 2, shoot begins,” read the post uploaded by the ALT Balaji through their official handle Instagram handle.

Dev DD, in its first season, attracted a lot of audience with its bold and fearless storyline. The Dev DD series actually portrays the modern version of Devdas (a novel written by Sarat Chandra Chattopadhyay), with feminism, sexism, and a lot of other things that the society refuses to talk about has been stressed upon.

With Asheema Vardaan, Akhil Kapur, Sanjay Suri, Rashmi Agdekar, Rumana Molla, and Sandeep Pandey as the star cast of the series, Dev DD season 2 is going to be a huge project with a deadly storyline.

The first series had 11 episodes in it, but for the second season of The Dev DD, there is no confirmation on the number of episodes.

Wedding or any festival, can be ready like Katrina Kaif, people will look back again and again

From Dharmendra to Sanjay Khan, these Bollywood stars remarried without divorcing their first wives

Neha Kakkar and Tony Kakkar will spread thorny fever among the contestants!

Your favorite rice can become the cause of cancer, make it safe in this way