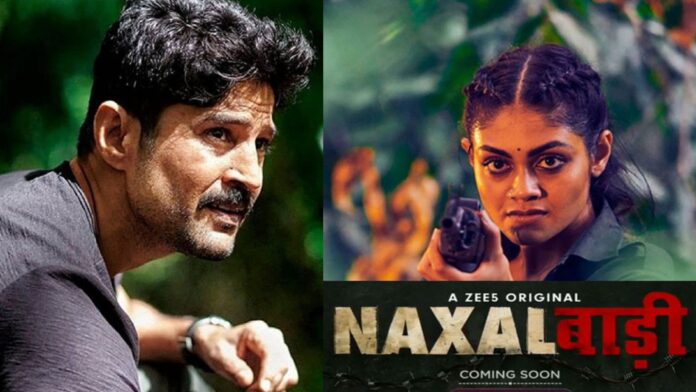 Zee 5 is maintaining their entertainment longitudes with such great contents of Original series and films. Though the COVID pandemic affected the web industry a lot Zee 5 continued their releasing. And now Zee5 will have another blockbuster action drama with Rajeev Khandelwal ‘ Naxalbari’. Rajeev will be looked at in different shapes and feel in that series which is having its shoot in Goa and Madhyapradesh Jungles.

Arjun Singh Baran and Kartik D Nishandar of GSEAMS, Producers, and director Partho Mitra decided it to be a relevant story for present circumstances. It will have its premiere on November 28th.

This is the story of protagonists rising up against the red. And a police officer Raghav which is Rajeev himself who will take part in this difficult plot. Those eight action-packed episodes that alternate between the dense jungles of Maharashtra and metropolitan cities which increasingly become hotbeds for the Naxal ideology.

They have to work in the muck and slash all around with worms and effective stinks in it. According to Rajeev, it is a completely new experience for him. And it is assumed that after his TV life he made another step towards a successful film-stat life through this original film. In his new dashing look, he is looking very different with a mustache. But as a strong character, he is expected to be ‘The Rajeev Khandelwal’ as well.

The star casts include Tina Datta as Ketki, Sreejita Dey as Prakriti, Satyadeep Mishra as Pahan, Shakti Anand as Binu Atram, and Aamir Ali as Keswani in amazing roles. Amir Ali is also making his digital debut in a pivotal role through this series.

“The cast and crew have undergone a major rejig because of the whole COVID thing. But eventually, we have all very capable people on board. I am looking forward to working with Aamir, Satyadeep, Tina, and others as my co-actors. I have never had the opportunity of working with any of them, so it makes it even more exciting. We have had table readings for the show, and I have used this time away from set, to work on my character. I am hoping it is a treat for my fans because they have never seen me in a role like this. My character of the STF agent should surprise the audience because it has many shades to it, starting from humor and action to essaying a lot of emotions throughout the series”, says actor Rajeev Khandelwal about NAXAL.