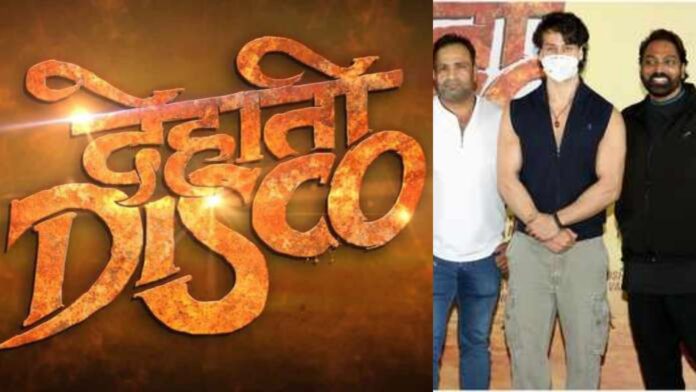 Tiger Shroff’s upcoming blockbuster movie ‘Dehati Disco’ and its poster was launched on October 15, Where the all crew members were present. This poster has a picture of a villager who is none other than famous Bollywood dance choreographer The Ganesh Acharya, he was carrying a child on his shoulders. Eventually, it was the first Mahurat after the COVID pandemic.

‘Dehati Disco’ is produced by Kamal Kishor Mishra and directed by Manoj Sharma. The film will go on floors from October 25 on the occasion of Dussehra.

The famous percussionist Sivamani performed live drum performances. I will have scenes from Lucknow and UP. Ganesh Achary is in the lead role. The action director will be  Abbas Ali Moghul and music will come from Sivamani himself. It is going to be a huge success. According to Ganesh Acharya, it will be the first film in Bollywood, which will show the purest form of dance and art.

The Teaser was watched by more than 1.3 Million people on the Instagram page of Tiger Shroff. So it is assumed that fans already gave their appreciation for their favorite Tiger.

Tiger said, “As far as this film is concerned, I feel this film is going to be a blockbuster because it has the right emotions, it has got Masterji who is synonymous with dancing. This film revolves around Dehati disco dance which is a mix of desi and international dance forms and it’s a specialty of Masterji, so I am eagerly waiting for the release of this film and I want to wish all the best to the entire cast and crew of the film.”

Tiger Shroff is famous for his ‘ Heropanti’, ‘Baghi’, ‘Baghi 2 ‘, and his upcoming action will be seen on Hindi remake of Hollywood film ‘Rambo’ and Ahmed Khan directorial ‘Heropanti 2’.