Home Entertainment TAISH TRAILER IS OUT: PULKIT SAMRAT TALKS ABOUT HIS PHYSIC 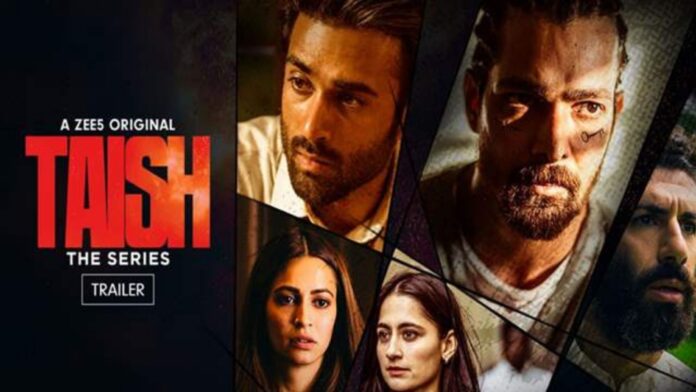 Zee 5 Originals is have geared up a level with the release of TAISH TRAILER. This crime-thriller will be starring many of the talented actors of Bollywood. The plot has been carefully crafted with mystery and suspense that will leave the audience in awe.

The cast of Taish is an interesting combination of many talented male and female faces. The cast of Taish includes Harshavardhan Rane, Pulkit Samrat, Jim Sarbh, Kriti Kharbandra, Sanjeeda Sheikh. These actors will be playing the lead role. The movie+series is going to be a 6-episode drama. Taish has been directed by Bejoy Nambiar.

About The Plot Of Taish

With a new taste of crime, love, betrayal, and friendship, the plot talks about so many things that might leave the viewers confused. Basically, it starts with a friendly vibe between Sunny and Rohan. Rohan’s brother is about to get married and Sunny came to attend the wedding. There was another part that depicts the dark and murky side of a criminal family. The members included Kuljinder and his two brothers Jassie and Pali. The crisis began with the affair between Jahaan, Kuljinder’s wife, and Pali. He planned to depart from his family with her, which unfortunately failed. The collision of the two ends brings out a series of unholy violence lead by murders and deaths. Each scene unfolds as well as intensifies the mystery so well that it seems nerve-wracking.

Pulkit Samrat’s Take On The Movie

Pulkit Samrat sounded pretty excited while talking about the movie. He said, “The character Sunny is very flamboyant, wears his heart on his sleeve kind of a guy, fun-loving, he lives life by the moment, very impulsive.” He also added, “So Bejoy and I both wanted these characteristics to be seen physically as well; like you look at the character and you should be able to understand what he is like. The tattoo team came on board, we figured it out and zeroed in on a certain amount of tattoos and what kind of tattoos we can have.” About his physical transformation, he said, “My trainer started working on the physique aspect of it because there were supposed to be two different looks in the film. In the first half, Sunny was supposed to be very flamboyant, full of life; in the second half Sunny ages through the film, so that age is supposed to be seen physically, the muscle is not supposed to be that ripped.”   The stars are already excited about the forthcoming movie+series, Taish, which is about to release on October 29.