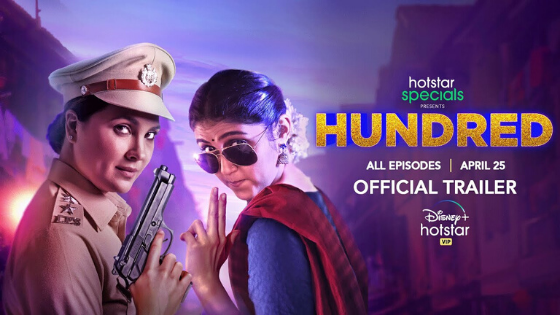 Lara Dutta will soon make her digital debut with Hotstar’s web series ‘Hundred‘. Apart from Lara Dutta, Karan Wahi, Rinku Rajguru, Sudhanshu Pandey, Parmeet Sethi, Rohini Hattangadi, Arun Nalavade, and Makarand Deshpande will also be seen in this web series. The trailer of this web series has been released. Lara Dutta has released the trailer on her social media.

Sharing the trailer of the Web series, Lara wrote, “Hotstar Hundred Trailer! We could not Agree on any idea for launch, but the trailer must be brought to you. We are coming to show you our pair’s Daring Hotstar Special. Watch all the episodes from April 25 on Disney+ Hotstar. “

Karan Wahi has also shared the trailer on his Instagram account. Sharing the trailer, Karan wrote, “#Hundred First Look! By watching the trailer you will also understand what I was saying about their pair. We are bringing a little entertainment dose to your life with Hotstar Special. All episodes Watch Disney+ Hotstar on April 25. “

Talking about ‘Hundred’, it is an action-comedy show. The story of the show is of a sick girl (played by Rinku Rajguru), who dreams of going to Switzerland, but does not have that much money. And then it is revealed that She has a brain tumor and has the last 100 days of his life. And now she looks for adventure in the rest of her life. She then meets the police officer (Lara) who appoints as an undercover agent.

After this, the two unite to complete a mission in 100 days, which also leads to some different twists in the story. In the trailer, Officer Soumya (Lara) is also seen training Netra (Rinku). Seeing the trailer, it seems that the bonding of the two in the story will be worth watching. This web series will be full of action and comedy. The nine episodes web series have been directed by Ruchi Narayan. And it will be released on April 25 on Disney+ Hotstar.