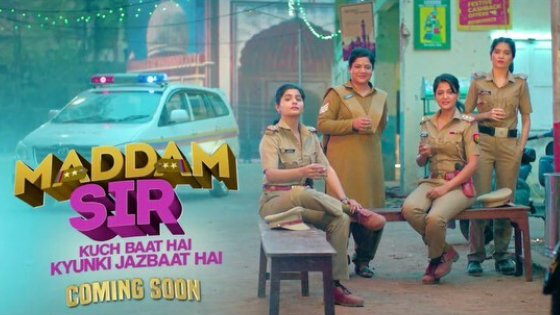 Madam Sir serial trailer is launched recently which shows the four female lead characters in the serial. It is predicted that the story will be revolving around the lady police officers and their work.

It could be an emotional drama kind of TV serial which may bring lots of entertainment. It has all new faces that make the serial more appealing.

Madam Sir serial is produced by the Jai Production company.

Recently launched trailer of the upcoming serial shows four young lady police officers in patrolling of the city. At the same time, a guy is trying to start his car which is not working due to some reason. One of the lady officers solves his problem by using her skills.

The person asks for a selfie to the lady police officers. In reaction to this, the SHO raises her brow and ask for police batten. To the guy’s surprise, it turns into a selfie stick when she uses it tactfully. That person stays astonished by her behavior. All of them take a selfie.

The trailer is successful to achieve thousands of views in just a few days. Its story is surely entertaining. The plot gives it a comedy touch. Let’s see what time reveals!!

It would be interesting to watch the highly anticipated serial Madam sir on SAB TV from January. The lady police officer story has a lot in pipeline to make the audience connected to it.

SAB TV has launched the trailer of Madam Sir as “Naya Show” on Instagram recently which has gained lakhs of views.

Career Goal | What after BBA?