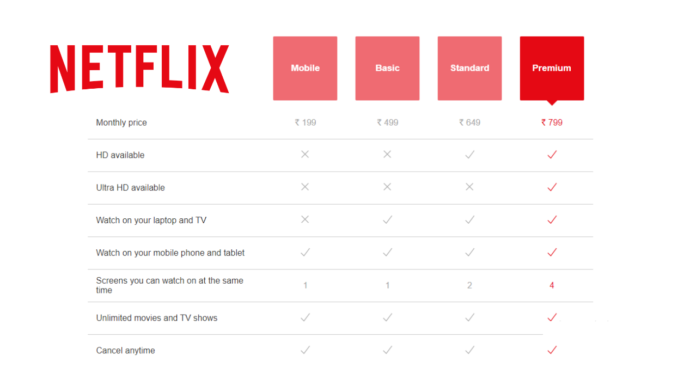 Netflix, a less-known word before 2 years is now a status symbol amongst youngsters. The Netflix owners know it well. As a part of the strategy, Netflix plans in India are modified according to user demands.

According to Netflix Director, Product innovation, Ajay Arora, India has the world’s highest mobile subscribers of Netflix plans in India. Youth prefers to use it on their personal cell. It clearly brightens the era of personal entertainment.

That’s why Netflix has come up with the latest subscription plan to attract its mobile data users. This is stated that it is the cheapest plan available on earth from Netflix that is offered to Indian consumers.

They provide a facility of downgrade or upgrade as per changing needs. It makes it super flexible and user-friendly.

The New Netflix Plan in India Starting just for 199 per month. This plan will serve Netflix on smartphones as well as on a tablet. It provides a single user at a time facility. Subscribers can enjoy unlimited movies and favorite shows on this plan. This Netflix plan is designed for mobile and named as “Mobile”. It has a disadvantage that the users can not use it on laptop or TV. It is specially designed for smartphone users. This Netflix plan in India is the result of the fact that maximum people sign up on the smartphone in India compare to the rest of the world.

Netflix has planned to invest a huge amount on Indian films and original web series by concluding from a survey that shows more than half the time on mobile is utilized in entertainment by the Indian consumers. The modified Netflix plans in India are the calculative move.

So far, Netflix has played a smart move by launching Netflix plans in India. Now, it is easier for users to take advantage of the strongest OTT content player in the market. There is no doubt in the quality content available on Netflix.

The premium Netflix plan offers 4 screen sharing facility at a time. It makes it more viable and costlier at the same time.

Karva Chauth 2021: Ranveer will keep a Karva Chauth fast for Deepika, putting her name in her hands.

Ehsaas Channa of Kota Factory saw a decline due to a short break despite never...

Tiger shroff next year is pre-planned with these blockbuster Films

When And Where to Watch BEL vs FRA on SonyLIV; Jio TV; Sony Ten Network