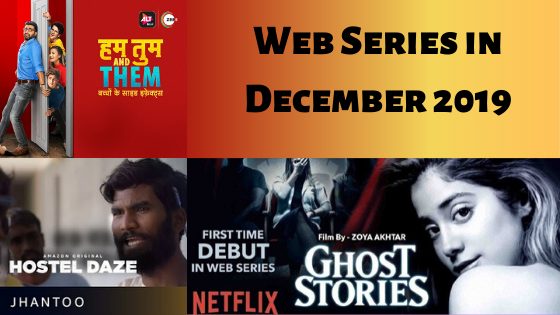 Worth Watching Entertainment Dhamaka Of December 2019

December 2019, is going to be the most interesting for web series lovers. The increasing popularity of Web series is the sign of a new entertainment segment OTT. There are several most awaited web series season 2 that are on their way to you. Some of them are from Amazon, and the rest are from Alt Balaji, Mix player and Netflix(as always!!)

Web series with viral content are most influential and covering the talks in a town like sacred games, Mirzapur and the common man. The exciting upcoming web series in December 2019 is going to make the last month of the year full of entertainment.

With a Fiction cricket team background, the first season was a hit. Story of Mumbai Mavericks, playing in Power Play League, was a pure reflection of India’s favorite game. Its twist and turn are worth moving!! Farhan Akhtar and Ritesh Sidhwani’s production, this web series was ended with a bunch of unanswered questions. This time, it is well expected to reveal the truth. Starcast including Richa Chadha, Vivek Oberoi, Angad Bedi and Sayani Gupta looking most watch with the poster itself!! Siddhant Chaturvedi (from Gully Boy) has high hope from the audience this time.

Let’s watch it starting from 6th December on Amazon Prime. Usually prime has a powerful impression in OTT, this series is going to make it or break it. Whats say?

The first Collab show Between TVF and Amazon Prime is going to hit the marks. That team has shown charisma in Kota Factory, has updated its standards with the audience catching content in this series!!

Saurabh Khanna, Sameer Saxena, and Raghav Subbu are the face behind Hostel Daze. It is assumed to be around engineering hostel life that most college going girls and guys relate to. The roller coaster ride of engineering life is going to be celebrated by Netizens as expected.

Kota factory has raised the standards, it is worth watching how Hostel dAze maintain it. What do you think?

After a successful production of Lust stories, the team Karan Johar, Zoya Akhtar, Anurag Kashyap, and Dibakar Benerjee is back with Ghost stories. As the name suggests, in the horror genre, it is a compilation of four short stories, just like the previous one.

Releasing on the 1st day of 2020, it has a major attraction as “Janhvi Kapoor” is supposed to be in as her web series debut. It is a bunch of short stories connected with each other that can have a dense impact on logical minds.

Expected to be released on 14th December, is a life of famous Politician late Jayalalitha “amma” is a third of its kind and foremost in web series. Ramya Krishnan is mirroring the image of the late chief minister very well in the trailer released on 5th December, coinciding with Jayalalitha’s Death Anniversary. Life of the politician is very consciously curated as a brave girl, beautiful teenager and graceful lady politician is expected to be well covered in the web series. She comes up as a Strong leader after MG Ramachandran, she well- described. The web series contains 11 episodes and going to be streamed in 4 regional languages, which will make it a catch for the audience cum followers.

It is a must-watch because of the awesome acting of  Ramya Krishnan and the life of a lady political icon in the web series. It is directed by Gautham Menon and written by Reshma Ghatala, Queen is streaming on MX player from 14th December. Its trailer was a Youtube sensation, that clearly states the popularity of the upcoming web series.

A web series dominated by a single parent concept has a viral trailer featuring Shweta Tiwari, Akshay Oberoi, and Trupti Khamkar. The story goes around two single parents with four children together, is a twisted love story of a wanted to be a couple, can not excuse their role as a parent in real life is going to be catchy one for every age group. Produced By Ekta Kapoor, it is a combination of a bold and sexier version of web series.

Shweta Tiwari in Bold and Beautiful role, as her digital debut, will be loved to be watched. The catchy tag line “Bacho k side effect” is enough to draw the audience to the ALT Balaji.

Comment your views about all of them and let us know your favorite one. See you soon!!