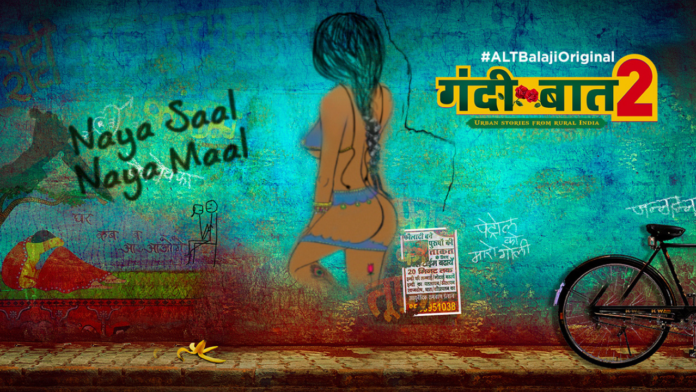 One of the most anticipated series of ALTBalaji is back with its second season. Yes, online streaming of Gandii Baat Season 2 is started. This time Gandii Baat 2 has made a boldest, steamy and sensual comeback.

Gandii Baat 2 series also featured a peppy item song Dil Behla Du Tera. The item song features Gandii Baat Season 2 Cast including Scarlett Wilson, Neetha Shetty, and Flora Saini.  This latest item song created buzz among the listener and also made its place in the top charts. Well, finally the most awaited series of 2019 is here. If you haven’t watched the Gandii Baat Season 2 yet, then you may now watch it at ALTBalaji.

Actor Flora Saini comments, “It’s Gandii Baat 2, so that means there’s going to be twice the fun, hotness, substance. One thing that I’ve absolutely loved is that there’s a strong women-centric message in every episode. Each of these stories has tales where women are fighting back and letting men know that a lady’s love is not one to be taken for granted. They do not always succumb to society’s pressure and their demands. I am excited, at the same time nervous as it is something that I have done for the very first time. I think with bold concepts and strong performances, the series will sure grab a lot of eyeballs.”

Gandii Baat 2 have 4 Episodes. The Gandii Baat Season 2 First Episode given an awesome answer to the body shammers. Furthermore, it also proved to be a complete winner for those who love their appearance. In the upcoming Gandii Baat 2 episodes, viewers will also enjoy the story revolve around pre-marital sex. Moreover, the upcoming episodes of Gandi Baat Season 2 will also showcase the stories of wicked spirits in villages with a sexual touch. Furthermore, viewers will also enjoy a story based on dishonesty and conniving in the final episodes.

Feeling Excited. Well, this is the magic of Gandii Baat 2. So don’t miss even a single episode and for further details stay connected with us…

Akshay Kumar left for London to shoot the film 2 days after his mother’s death,...

Lucifer season 6: The wait for season 6 of Netflix’s popular web series Lucifer is...

Urmila Matondkar reunited with Madhuri Dixit on the sets of Dance Deewane 3 to recreate...