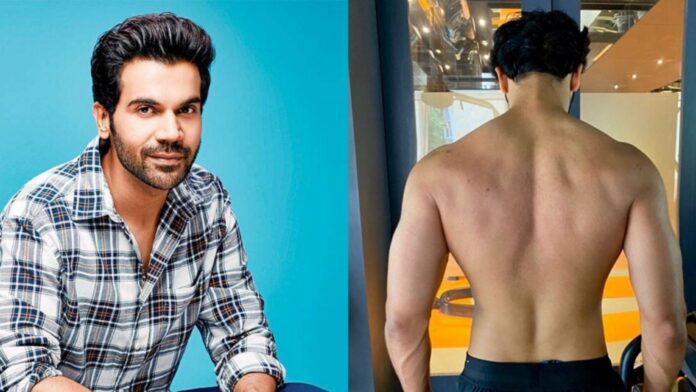 Popular Actor Rajkumar Rao has handed out a new post in his Instagram account. There he hinted the audience about his character in his new movie, whose name is yet to be disclosed. This time he is going through a physical transformation, that has been revealed in the post. Let’s find out what is the actor showing-up for!

Flaunting his bare body and posing backwards, Rajkumar Rao has openly flashed about the gains he will be muttering for his new role. Although not much has been revealed apart from his hot-bod show, the audience is still looking up for the new look he will possess Rajkumar Rao posted the photo of himself while captioning with the words to tease his fans. He wrote, “Naya kirdaar. Nayi taiyaari.” To his post, the Bolly-town has also left their comment. While actor Siddhant Chaturvedi reacted by just dropped a fire emoji, popular filmmaker Mukesh Chhabra commented saying, “Kya baat hai“. Not only it ends here, as we have actress Bhumi Pednekar commented, “I can see it.”
Now we are left to see what is his role and what movie is he preparing for.

As for the latest movie of Rajkumar Rao, Ludo has been depicted as a dark comedy, where he played the character of a one-sided meek lover. There he would get ready to do whatever has been demanded by his love interest, even without getting his love reciprocated.
However, his upcoming that has been queued are namely, Badhaai Do and RoohiAfzana.