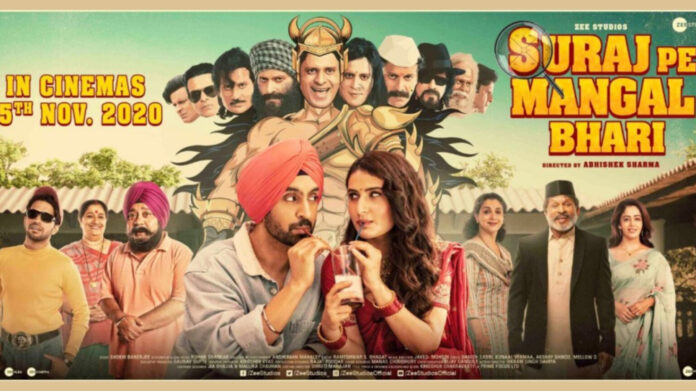 Keeping in mind all the security amidst the coronavirus epidemic, theaters have been opened after about 7 months. After such a long period, Diljit Dosanjh, Manoj Bajpayee and Fatima Sana Sheikh starrer film Suraj Pe Mangal Bharti knocked in theaters on Sunday (15 November). Meanwhile, many viewers are enjoying going with their family to watch this film. In such a situation, Diljit Dosanjh has thanked all of them for watching the film in the Corona era.

Diljit Dosanjh tweeted, ‘Even in corona people with their families are watching film in theater, that is such big deal. Thank you from the heart. I am not a very big artist but still playing my part. Hard time is going on for cinema, but still some intellectual people are becoming smart’. ‘Suraj Pe Mangal Bhari’ is the first Bollywood new film to be released in cinema hall after theaters re-open. Earlier, after being allowed in lockdown, the theater owner tried to drag the audience to theaters through several old films.

According to the reports, ‘Suraj Pe Mangal Bhari’ did a business of around 80 lakhs at the box office on the first day. Although the film did not get as good a start as the makers were expecting. The film has been released in India on nearly 800 screens. Diljit Dosanjh and Fatima Sana Sheikh are seen romancing onscreen in the film.