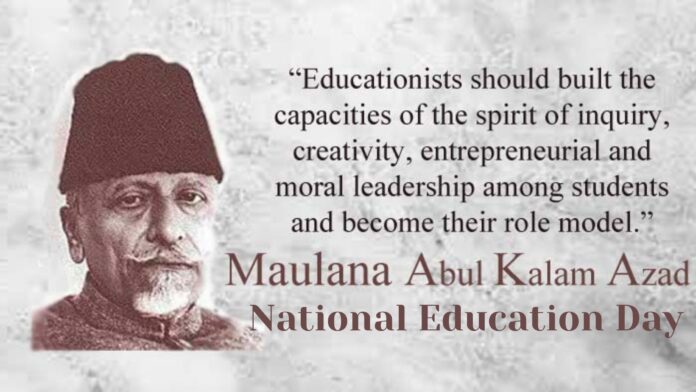 ” We must not for a moment forget, it is a birthright of every individual to receive at least the basic education without which he cannot fully discharge his duties as a citizen.”

Today is the birth anniversary of Maulana Abul Kalam Azad, the first Union Minister of Education of India, who served in independent India from 15th August 1947 to 2nd February 1958. And on November 11, 2008, at the Vigyan Bhawan in New Delhi, the then President Pratibha Patil declared this day as ‘National Education Day’.

He was born on 11 November 1888 in Makkah, part of the then Ottoman Empire. His real name was Sayyid Ghulam Muhiyuddin Ahmed bin Khairuddin Al Hussaini, but in the end, he became known as Maulana Abul Kalam Azad. And he is remembered as an eminent scholar, poet, and revolutionary journalist and for his invaluable contribution to the Indian freedom struggle. Maulana Azad played a key role in strengthening the education system in India. He was also fluent in Arabic, Hindi, English, Urdu, Persian and Bengali. He is responsible for shaping the modern education system of the country. The first IIT, IISC, School of Planning and Architecture and University Grants Commission were established during his tenure as Minister of Education. He was one of the key architects of independent India, responsible for establishing top educational institutions such as AICTE and UGC. The most prominent cultural, Sahitya Academy was also built, including the Sangeet Natak Academy, the Lalit Kala Academy, the Sahitya Academy and the Council for Cultural Relations of India. In 1992, he was posthumously awarded the Bharat Ratna, India’s highest civilian award.

“Art is the education of emotions and is thus an essential element in any scheme of truly national education. Education, whether at the secondary or at the university stage, cannot be regarded as complete if it does not train our faculties to the perception of beauty.”

On 2008, to pay gratitude to this remarkable personality government of India decides to mark his birth-anniversary 11th of November as ‘National Education Day’.

Celebrations of this day:

“To succeed in your mission, you must have single-minded devotion to your goal.”

On this day, various campaigns and programs are organized to spread awareness about education so that people become aware and attracted to education. To spread the nation’s commitment to literacy and education in all fields, every educational institution celebrates the day through seminars, competitions, workshops, and rallies with banner cards and slogans. Corona pandemic hinders the concept of gathering, so this year lets’ spread awareness with the help of social sites and online seminars, and competitions.

THE FIVE DAYS OF THE SPLENDIFEROUS DIWALI: ALL THE SIGNIFICANCE IS STATED