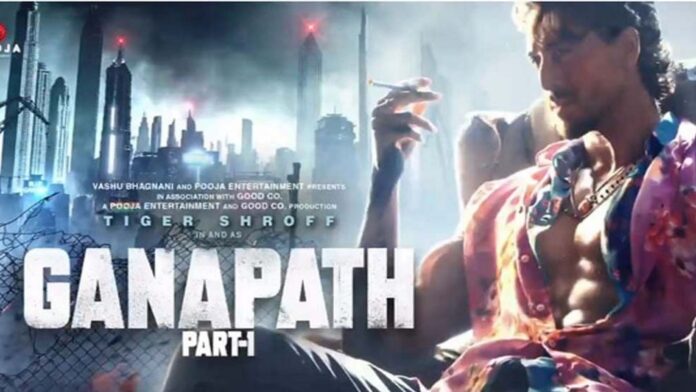 Ganpath: Tiger Shroff is an actor who is named among the best dancers and fitness enthusiasts in the Hindi film industry. He has amazed the audiences with his dancing skills, his martial arts, and his acting which is improving with every movie. The actor made his debut with “Heropanti” alongside Kriti Sanon and has been in the industry race since then.

The “War” actor has a massive fan following on Instagram where he surprised his fan by sharing his upcoming action-thriller Ganpath motion poster. In the poster, he can be seen sitting like a gangster revealing his chiseled body and a cigarette in his hand. A catchy dialogue is running in the background as well and Shroff’s accent is totally like Bollywood’s typical gangster. One can sense with the VFX effects and background music that the movie is not going to be light-hearted but surely a serious action drama.

The film is backed by Good Co in association with Pooja enterprise. “Ganpath” is helmed by director Vikas Bahl and produced by Jackky Bhagnani.  The shooting is expected to begin mid-2021. Reportedly, actresses Nupur Sanon and Nora Fatehi will be paired next to Tiger Shroff in the upcoming movie. Talking about the film in an interview, Tiger shroff said : “This film is different for me from the rest of the films I’ve done to date because of the character I play. After multiple conversations with Vikas and Jackky, the script and scale look promising. I am really looking forward to this one. This will be my first time working with Jackky and Vikas and it will be hugely exciting to collaborate with them.”