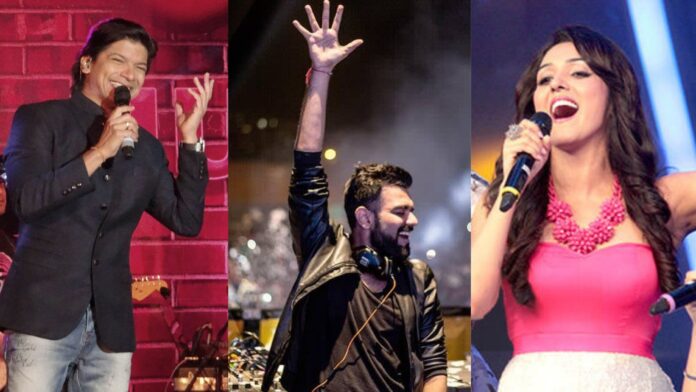 Bigg Boss is making preparations for a non-stop DJ night in the house to be held in the house. The party has been scheduled for November 11. Singers like Shaan and Neeti Mohan along with Dj Chetas will be seen performing in the house of Bigg boss 14.

The official account of Colors TV has released a video in their Instagram handle as the notification of the Bigg boss 14 DJ Night. The video has featured singers like Shaan and Neeti Mohan and DJ Chetas. They have announced their grand performance in the house of Bigg Boss 14. The caption that was given for the post was, “Aapke chaheete sitaaro ke saath #BB14 ke gharwalein manayenge, #BBDiscoNight! Watch on 11th November at 10:30 PM. Catch #BiggBoss14 before TV on @VootSelect. #BiggBoss2020 #BB14 @beingsalmankhan @Dj_Chetas @The_AnuMalik @neetimohan18 @singer_shaan @SachinJigarLive.”

The video also shows the glimpse of the Bigg Boss 14 contestants. They were seen contributing their moves as the music goes on. Housemates like Rubina Dilaik, Eijaz Khan, and Jasmin Bhasin has also presented their dance moves.

Singer Neeti Mohan will share her voice on the tune of Chali re, which is a song from the movie, Jab Tak Hai Jaan. Apart from her, the show will commence with the song of Anu Malik, Sachin Jigar. Amid all the drama, conflicts and struggle, a hint of relief has been arranged by the house of Bigg boss 14 for the contestants. Don’t forget to tune into Colors TV to witness the party.