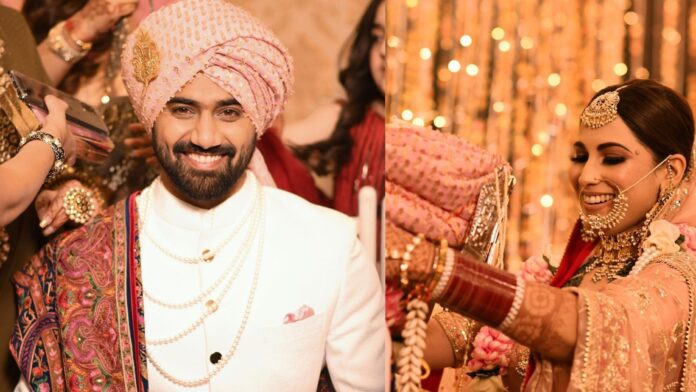 Vishal Karwal is a very known face in television and now he got married with his old friend and girlfriend Heena on Palampur in Himachal Pradesh. After a brief courtship of a year and a half both family decided to postpone the festive wedding for December. But instead of COVID pandemic atlast they stick on their plan and had each other officially on October 28. The Mehendi and Shagun took place on 26th and the Haldi Ceremony happend on 28th.

Vishal was in a relationship with Heena when he was completing his studies on Chandigarh. But unfortunately they lost touch after he moved to Mumbai, only to reconnect on Heena’s birthday 18 years later. And as they say, the rest is history. The Bhagyavidhaata actor shares, “Heena and I dated way back in 2001 when I was a student in Chandigarh, but we lost touch eventually. I wished her on Instagram on her birthday on April 15 last year and got talking. We have been dating since. I have known her for 20 years of my life.”

While he was asked about the secrecy in relationship and marriage, he said,  “I have never been vocal about my relationship. I like to keep it private and prefer not to talk about it at all.”

Chemistry between Vishal and Heena

Their love became more stronger when the reunited. When Vishal was asked about their chemistry, he said,  “Of course, we have a history. When I reconnected with Heena, I realised that we were so alike. I love to travel, be in the mountains and she loves that, too. Both of us love reading. There are many things in common, including our expectations from life and perspective towards it. She has completed her Masters in Business Administration and has worked for various companies. However, since the last couple of years, she is focusing on her art. She paints very well. She is a potter and wants to set up her own pottery studio. That’s the kind of life even I want to lead. I have been in Mumbai for 12 years, but I see myself exploring different things and having a life beyond showbiz. She strikes a proper balance in that sense. We understand each other really well.”

Vishal Worked on shows like ‘Splitsvilla’, ‘Rishton Se Badi Pratha’, ‘Dwarkadheesh Bhagwan Shri Krishna’ Bhagyavidhata, and ‘Bigg Boss 6’. He worked on the film, 1920 London. He has a bright future indeed.