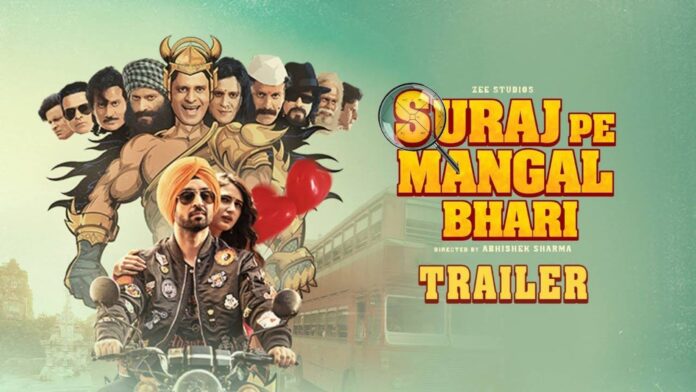 Official trailer is out now:

In the 1990s, a wedding detective has to perform background checks on prospective grooms. In the time before social media and mobile phones, everything has to be done in person. Set in the 1990s, Madhu Mangal Rane (Manoj Vajpayee) is playing a wedding detective, who does a background check of grooms. In 90’s it was a norm as there were no mobile phones or social media and people had to deal with everything physically. This gives rise to comical situations.

In the Suraj pe mangal bhari official trailer, Diljit Dosanjh who is playing a bachelor character ‘Suraj’ set in a 90’s day in Bombay, he is desperately looking for a bride who doesn’t even let work her mother in the kitchen and who use to make love with him every time. But there is a problem that Suraj is not fluent in English and creates a plethora of scenes with his bizarre spoken. There is another problem which didn’t let his wedding fix that is ‘Mangal(Manoj Vajpayee) a detective who works to gather evidence of those men who are going to marry, he collect pictures of Suraj when he is having a beer and cede to the girl’s parents. Suraj finds out that who did this to him then he got Mangal who used to Untie relations before marriages and then the drama begins between Suraj and mangal. That is why the Title is “Suraj pe mangal bhari”