Home Bollywood Siddharth Malhotra came back with the shooting of ‘Shershaah’ 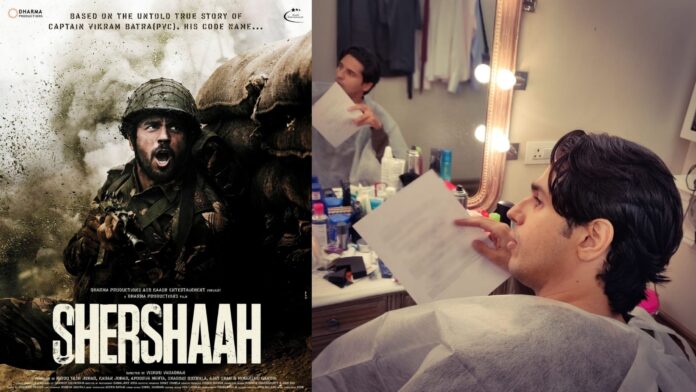 After the huge gap industry is finally growing bit to bit. It is expected to be a good ending of 2020 with better movies. ‘ Marjaavaan’ actor is coming with his new film ‘Shershaah’. He resumed his shooting after the COVID pandemic on Tuesday.

During the lockdown, Sid was equally active in his social media. After coming back on the set of Shershaah, he shared his pictures on makeup. Siddharth is seen sitting in a green room, as he gets ready for the filming. They took a lot of precautions for COVID. Sidharth is seen sporting a white apron as he gets his make-up applied through an airbrush by a makeup artist dressed in a PPE kit. He captioned the pictures as, “Soldier back at work! #OnTheSets #Shershaah.”

This film will be Karan Johar’s production and it is being directed by Vishnuvardhan and co-produced by Karan Johar. The stars Kiara Advani and Pawan Chopra will be in pivotal roles in this patriotic plot.

The film is about the Kargil War Soldier, Captain Vikram Batra who was also awarded the Paramvir Chakra. Kiara Advani is going to play Vikram’s girlfriend, Dimple Cheema.

This film was going to release earlier. Due to this pandemic, it will be released further. The date is not yet announced.