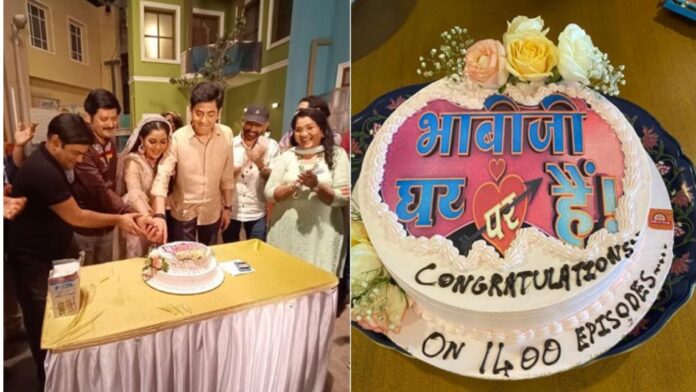 A great show indeed, Bhabiji Ghar Par Hain, turns out to celebrate their success with the completion of 1400 episodes. It is a winning streak for the production house to maintain content that is unique as well as entertaining. It is a difficult task to make people laugh with solid humor without hurting the sentiments of the common people. The show has produced quality content for their audience, without any doubt.

Sanjay Kohli and Binaiffer Kohli produced television series Bhabiji Ghar Par Hain team has been found cutting cake for the celebration. The cake has the name of the show painted on it. While the casts were seen holding the knife, others stood clapping for the success.

The Actors On The Occasion

Shubhangi, who is seen in the skin of Angoori Bhabi, claims it to be a “big and proud moment for the entire team.”

She also added further, “It has been a fantastic journey for me. BGPH enjoys a cult status amongst the comedy shows and continues to be my personal favourite as well as the most-loved show on television. The character of Angoori Bhabi and her catchphrase ‘Sahi pakde hain’ has received so much appreciation and love from everyone, which is very encouraging for me as an artist. This journey of 1400 episodes would not have been possible without the undying support of the fans, our cast and crew of the show. Cheers to much more such successful and remarkable milestones.“

Asif, playing the role of Vibuti, says, “I am thrilled that the show has been receiving tremendous appreciation and affection. This show has given me a wonderful opportunity to portray so many entertaining characters. Each of them is special and very close to my heart. I look forward to more such momentous moments.“

Rohitshav aka Manmohan Tiwary also added his part, saying, “We are grateful to all our fans and the audience for this constant love and affection, and of course the entire cast and crew of BGPH. Looking forward to many such celebratory moments and continue to make India laugh with our fun plots and characters.“

However, Anita Bhabi’s character, which has been played by Saumya Tandon announced that she had quit the show. She has been a part of it for 5 years until August this year.

Bhabiji Ghar Par Hain is a comedy-drama that portrays two married couples. They are eventually the neighbors to each other. Ironically both the men have fallen in love with each other’s wife. The show displays the efforts of both the men to impress the ladies while winning over each other.

Bad news for the fans of Aamir Khan, the film ‘Lal Singh Chaddha’ will not be released this year, know the reason