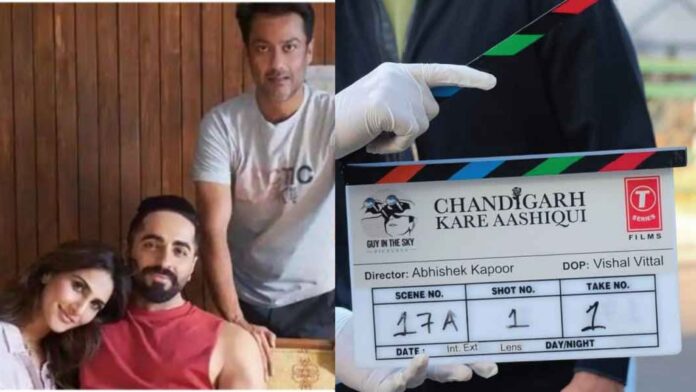 Bollywood actor Ayushmann Khurrana and actress Vaani Kapoor have started shooting for their upcoming film ‘Chandigarh Kare Aashiqui’ which is being directed by Abhishek Kapoor and produced by Pragya Kapoor and Bhushan Kumar.

Currently shooting is going on in Chandigarh. Fans of both the stars have been waiting for a long time to announce the title of this film and in view of this absurdity, the makers have made an official announcement regarding the title of the film.
The film is titled ‘Chandigarh Kare Aashiqui’.
Information is shared by both stars on their Twitter handle.

Ayushmann Khurana has shared two photos, he wrote, ‘Next stop: My hometown Chandigarh for the first time❤️
Excited to be a part of Abhishek Kapoor’s delightful progressive love story #ChandigarhKareAashiqui.’

Ayushman Khurana has created an athlete for this film. During the Coronavirus lockdown, he had worked hard to make this physical.

Fans are excited to see this pair of stars on the big screen together for the first time. However, Ayushmann Khurrana had said that he is very excited to work with the actress, working with Vaani Kapoor.

UPCET 2021 Answer Key Released: How to Raise Objections on upcet.nta.nic.in

Akhil Akkineni celebrates the wrap-up bash of Most Eligible Bachelor