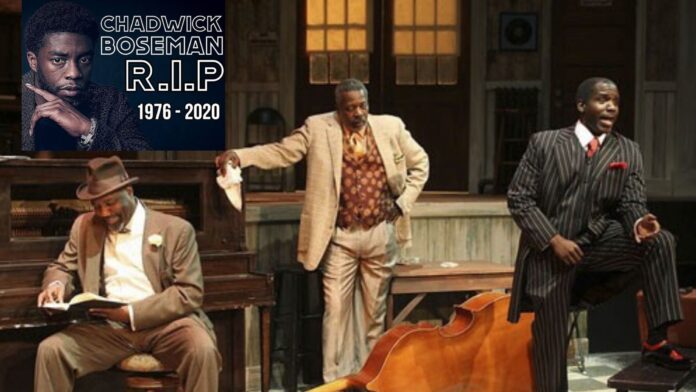 Late. Hollywood Star Chadwick Boseman’s last film Ma Rainey’s Black bottom will be directly aired on Netflix by 18th December globally. Everybody knows that the renowned actor Balck Panther aka Chadwick Boseman has passed away as he was battling against Life-threatening disease Colonel cancer and eventually he said goodbye to all of us. Now his last film treating the same way we treated our beloved Sushant Singh Rajput’s Dil Bechara. And we wish that the Black bottom will get the highest views ever on any ott platform.

Black bottom trailer is out now:

is an upcoming American drama film directed by George c.wolfe and written by Ruben Santiago-Hudson, based on the play of the same name by August Wilson Produced by Todd Black, Denzel Washington, and Dany Wolf, the film centers on a fateful recording session of “Mother of the Blues” Ma Rainey in 1927 Chicago. It stars Vialo Davis and Chadwick Boseman (in his final film role prior to his death), with Glynn Turman, Colman Domingo, and Michael Potts in supporting roles.

Tensions and temperatures rise over the course of an afternoon recording session in 1920s Chicago as a band of musicians await trailblazing performer, the legendary “Mother of the Blues,”( Ma Rainey Viola Davis). Late to the session, the fearless, fiery Ma engages in a battle of wills with her white manager and producer over control of her music. As the band waits in the studio’s claustrophobic rehearsal room, ambitious trumpeter Levee (Chadwick Boseman) – who has an eye for Ma’s girlfriend and is determined to stake his own claim on the music industry – spurs his fellow musicians into an eruption of stories, truths, and lies that will forever change the course of their lives.