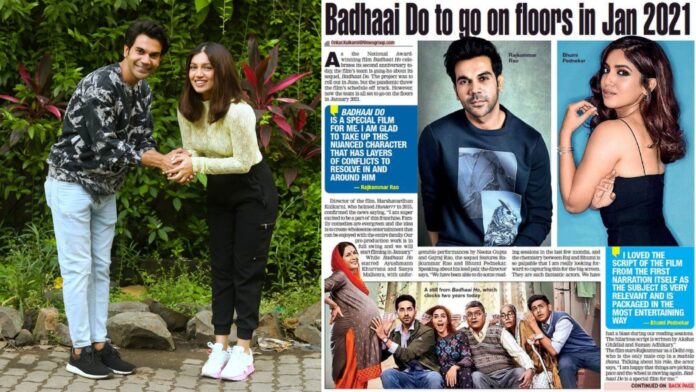 Junglee picture’s Badhai ho has completed it’s 2 years today, the film was directed by Amit Sharma and won 2 national awards on its name. On the occasion of 2 years from Badhai ho release, makers have announced the next part of this successful franchise titled  ‘Badhaai Do’ starring Rajkumar Rao and bhumi pednekar which will be commenced filming from January 2021.

Harshvardhan Kulkarni is going to direct this family comedy-drama and said in an interview that he is extremely happy for being a part of this successful franchise.

According to the reports, Rajkumar Rao playing the role of a single male cop in Delhi’s Mahila thana and Bhumi pednekar will be seen in a PT teacher’s character.

All over the entire cast & crew team are very excited for ‘Badhaai do’ and pre-planning for filming schedules is in full swing.

We hope that ‘Badhaai do’ will succeed to left another shadow on the viewer’s hearts as the previous one did.