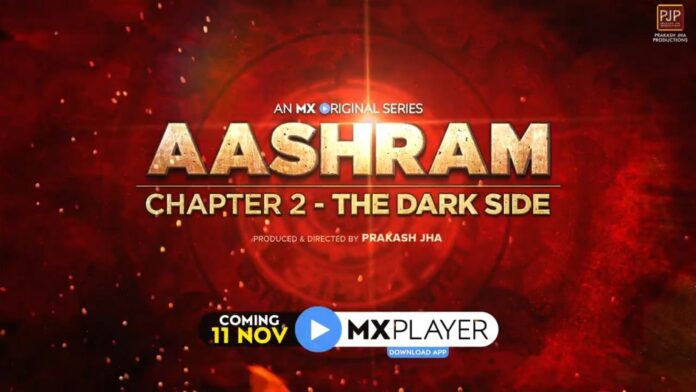 Aashram is a 2020 Indian Hindi-language crime drama web series directed by Prakash Jha for MX Player original. It is produced by Prakash Jha under Prakash Jha Productions. The story has been written by Habib Faisal And the first season which was started it’s streaming from 28th Aug 2020 with 9 episodes. And the second season is going to start it’s streaming from 11th November 2020, presenting by MX player an original Web series.

The story revolves around a Baba (preacher) known as ‘Baba Nirala.’ Whose followers have blind faith in him and will do anything that he asks of them. But it is for sure that this Baba Nirala is a conman, who makes sure that his devotees leave behind all kinds of ‘moh-maya’ and stays attached to the Aashram for life.

Meanwhile, Darshan Kumaar, the actor seen in Mary Kom and NH10 films before, is a cop in this series. Furthermore, he is adamant about unraveling the truth behind the skeletons and dead bodies recovered from the Asharam’s property. It seems to be a murder mystery.

Every episode unfolds a mystery that revolves around the Baba Nirala. Whether the cop will find evidence and prove anything is left for the Part II of ‘Aashram’ season 1, which they announced very subtly as the show ends. So the story will begin from the end of Season 1 with many interesting revelations which is yet to know. Bobby Deol in the mainstream as Kashipur wale baba nirala/monty. and the other cast are..