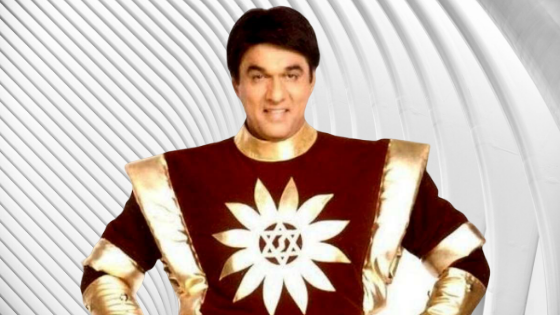 If you are a 90s kid, then Shaktimaan must be your favorite superhero of that time.  Now here is good news for you, ‘Shaktimaan’ is coming back on Doordarshan.  You can check the complete relevant information like Cast, Timing, Real Names, and Broadcasting Details from this page.

‘Shaktimaan’ is a television serial based on a superhero who got his superpowers through meditation and five factors of nature, which are Space, Earth, Air, Fire, and Water.

Shaktimaan fights the evil existing on the earth.  This television series was first aired on DD 1 from 13 September 1997 to 27 March 2005. This is directed by Dinker Jani and produced by Mukesh Khanna.

Now in the tough period of lockdown due to coronavirus epidemics, this television serial will provide some relaxation and Entertainment to all, as it is going to be broadcast again on the Doordarshan channel (DD Bharti) from the first week of April at 1 pm daily.

Due to coronavirus epidemics in 2020, the re-telecasting of SHAKTIMAAN is scheduled from 1st week of April 2020. The television series is being broadcast once in a day on DOORDARSHAN Channel with one hour of telecasting. The timing selected for the streaming is from 08 pm to 09 pm.

On-demand raised by the people of India, the ministry of Entertainment is planning to re-telecast the most famous television series of its time SHAKTIMAAN. There is no official announcement from the Ministry of Entertainment. Still, Mukesh Khanna tweeted a video about the epic news, as he quoted that “130 crore Indians will together get the opportunity to watch Shaktiman on DD once again. Wait for the announcement.”

Do not forget to watch the most entertaining and outstanding television series “SHAKTIMAN” from the very 1st week of April 2020 on DD Bharti as soon as it’s get aired.