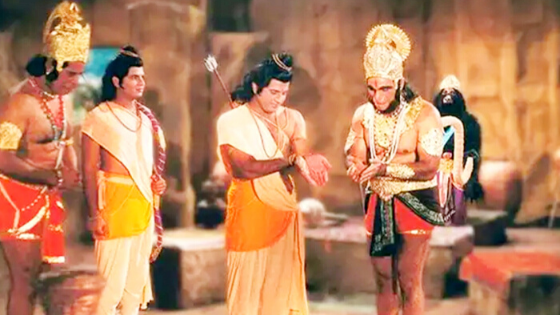 The most popular and awaited RAMAYANA is back now on DOORDARSHAN (DD National)!!! Know all details about the Ramayana Telecast Timing on DD National, Cast, and Broadcasting Time here only. In the present era, everyone is curious to know the whole information about their favorite things and Ramayana is one of them.

Ramayana, Indian historical mythological television series created and written by Ramanand Sagar under the production of Sagar Art Enterprises, aired first during 1987-1988. The idea of adoption for this series is taken from the Hindu mythological book – Valmiki’s Ramayan and Tulsidas’ Ramcharitmanas.

It is the show which had the highest viewership for any television series with 82 percent of viewership. It was first aired on Doordarshan channel (DD National) by weekly.  Now in 2020 due to the Coronavirus epidemic, this television series is scheduled to be re-telecasted on DD National twice in a day for one hour each.

The lead roles played by some expressive artists and all the other supportive artists were played it very brilliantly. The lead star cast is:

Due to coronavirus epidemics in 2020 the telecasting of Ramayana is rescheduled from 28th March 2020. The television series is being telecast twice in a day on DD National with one hour brakeless telecasting. The timing selected for the streaming is 9:00 AM to 10:00 AM and 9:00 PM to 10:00 PM.

For the very first time The Ramayana was broadcasted from 25th January to 31st July 1988. Now in the Coronavirus epidemic  Lock Down Period, The Information and Broadcasting Minister Prakash Javadekar has decided to re-telecast the 80s Ramayan on public demand from 28th March 2020. He tweeted  “Happy to announce that on public demand, we are starting re-telecast of ‘Ramayana’ from tomorrow, Saturday, March 28 in DD National, One episode in morning 9 am to 10 am, another in the evening 9 pm to 10 [email protected] @[email protected],”.

The public used various social media platforms to demand their favorite television shows like Ramanand Sagar’s ‘Ramayan’ and BR Chopra’s ‘Mahabharat’ to be re-telecast and the ministry took it in concern and announced the good news through Twiter.

All families whether they are Hindu or of any other religion are very happy and excited after this announcement. You can assume the popularity of Ramanand Sagar’s directed Ramayana at that time by the craze it is having in today’s generation.  Everyone is now talking about this great telecast of the time “Ramayana”. It expands the spirituality among the young generation and will surely provide some mental relaxation to all the people around India in this time of criticality. So if you have not seen any episode yet, then don’t miss out on the remaining as it is a good opportunity to know about “The Ramayana”.