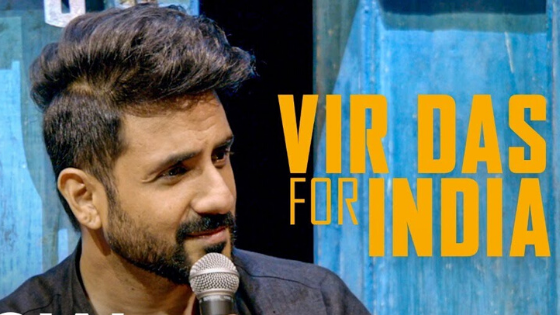 Vir das, a famous stand-up comedian of India will be featured in Netflix once again. Before this, we have been the witness of Vir das: Aborad and Vir das: Losing launched in 2017 and 2018, respectively.

This time Vir das is coming on 26 January 2020. It will be an hour-long stand-up comedy. We will find him talking about the history of india, people, tradition to modern culture and about some of the modern famous movies.

The stand-up comedy show will be streaming online from 26 January 2020. We are familiar with his unique style of content delivery in the past two shows. The fans of Vir Das are eagerly waiting for him to come upon the stage and exploit us with the funny one-liners.

The show is a part of Netflix’s global stand up comedy series. He is one of the eight Indian Comedians chosen for the same. But, you will be surprised to know that apart from Vir Das only Aditi Mittal is the one who has a special show on Netflix.

The recently launched trailer of the show has a glimpse of what we will get in the packet. Vir Das is talking about Indian Culture and rituals. The mentality of Indians while went abroad is a sarcastic joke wrapped in light words.

It the starting of the trailer he comes from a traditional door and sipping a tea from a Kulhad. The way of talking and his costume makes him more hearable. He speaks typical Hindi, with some popular grammatical errors, and mimicking tone.

Indian men described in the trailer of  Vir Das for India is a top-notch comedy hit of the trailer. In a single line, he is able to deliver a lot of unspoken words. His expression and perfect timing make his comedy a perfect light mood entertainment.

Let’s find him delivering Mother Teresa Joke on the other part of the show. Are you in? Let me know in comment section.