Home Television Yes, We Will See Shahrukh Khan On Dance Plus 5 Soon 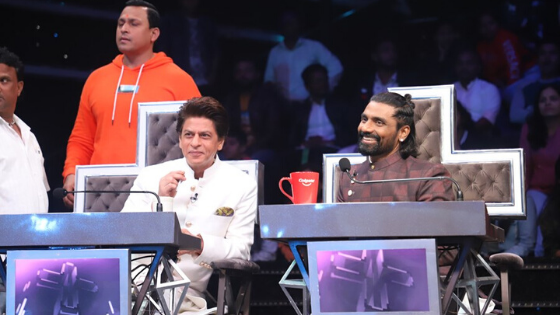 India’s most popular Bollywood actor Shahrukh Khan was seen on the Remo D’Souza Show Dance Plus 5 recently. Once a Chamatkar Hero, whose life is a Chamatakr, Shahrukh Khan is last seen on TV while Zeff Bezos visited India.

This time Shahrukh Khan was seen on the sets of  Dance Plus 5, posing with Remo. This show is one of the prominent shows of Star Plus and Hotstar. Being judged by Karishma Chavan, Dharmesh Yelande, Suresh Mukund, and Punit Pathak, this show is a TRP ruling show.

Shahrukh Khan was seen in Pathani Apparel in a stunning white look. This news is a moment of rejoicing for the Badshah Fans that they might see him in the show as a Celebrity Guest.

As the Grand Finale is closer, we can’t wait for Shahrukh’s Appearance in Dance Plus 5. We never knew it could be a pleasant surprise for all of us.

Dance Plus 5 Grand Finale is knocking the doors. A joint venture of Urban Brew Studios and Frames Production, this show is hosted by Raghav Juyal. Raghav was once upon a time contestant of such dance reality shows. Owner of brilliant dance skills, Raghav is the most praised host. Since the show started, the host and super judge are constant.

Remo D’Souza is the super judge of Dance Plus season. His in-depth knowledge of dance made him Guru in this industry.

Dance Plus 5 is the first season without Shakti. There is a big change in the judges’ panel. Shakti was replaced by Karishma and Suresh in this season. While Dharmesh and Punit are repeated.

The show has given a chance to talented personalities who are interested in dance irrespective of their background.