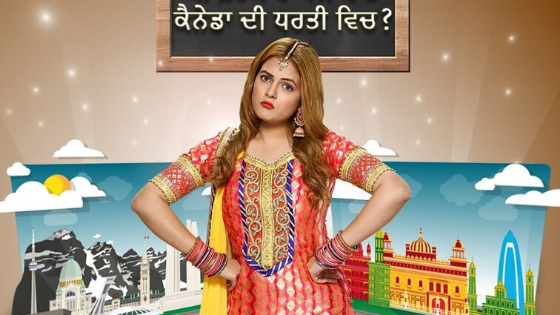 Newly launched channel Zee Punjabi is going to be one of the favorite Television Channel for Punjabis. The newly launched show on Zee Punjabi, Vilayti Bhabhi, is a comedy family drama. It is a story of a couple who opens NRI grooming classes which into hilarious consequences.

The guy, Sandy and his wife Emily decided to open the classes in guy’s home town in Punjab. Where they have an encounter with Canada immigration enthusiasts.

Kanwarpreet Singh (Sunny) and Isha Gupta (Emily) are in the lead role of the show. The other cast of Vilayti Bhabhi is as below:

The story revolves around a Canadian couple Sunny and Emily who came back to India for living from Canada. They started grooming classes in a village in Punjab. The villagers are excited to see them. The villagers went out of control just by the presence them.

The Punjabi show is a remake of Marathi shows Lagnachi Wife Weddingchi Bayku on Zee Marathi. It is a story of a Canadian teacher couple and the quirky characters of the village which occurs in a round of laughter. As we all know, Punjabi people and their dreams of Canada and Canadians.

The start date of Zee Punjabi Vilayti Bhabhi is 13 January 2020 from Monday to Friday at 9:00 PM.  the story and cast promise that any Punjabi Girl or Guy will easily correlate themselves with the characters of the show.

It could be seen on the Zee TV channel as well as on the Zee5 application. The show will be most entertaining amongst all other shows of Zee Punjabi.