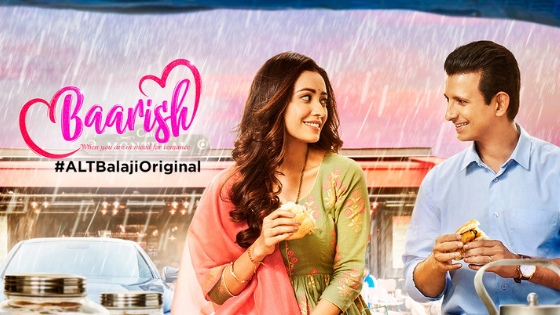 ALT Balaji is back with Baarish Season 2 Web Series after the huge success of Baarish season 1. It is in a totally new look. The story and characters are woven like a true-life character and anyone can easily correlate them in their personal life. Script and narration of Baarish Season 2 Web Series are in Original Ekta Kapoor Style. It seems she can sense the truly hardcore feelings of youth.

The feel of the rainy season is felt in winter while watching the filming soon video recently posted on youtube. It is a romantic heart touching story of a couple, Anuj and Gauravi.

As the filming video of Baarish Season 2 Web Series is launched before few months, makers can announce the dates anytime. The web series will be started soon. Stay tuned with us for further updates.

The web series has received a warm welcome in form of the first season from the audience. The song “Koi Bataye Kya Keh Rahi Hawayein” is soothing and peaceful composition.

The web series is a simple yet beautiful picturization of a boy and girl who met occasionally, found a connection and wished to stay together for the rest of the life. The amazing fact is they feel the chemistry with each other because of “Baarish”. The Baarish is a memorable romantic linking between two of them.

The lead role of Gauravi is played by Asha Negi and the male lead role features Sharman Joshi as Anuj. both look very natural in this role and the on-screen chemistry is worth watching.

The web series is being filmed recently but the buzz created is predicted as one of the lovely romantic web series sequels of ALT Balaji.