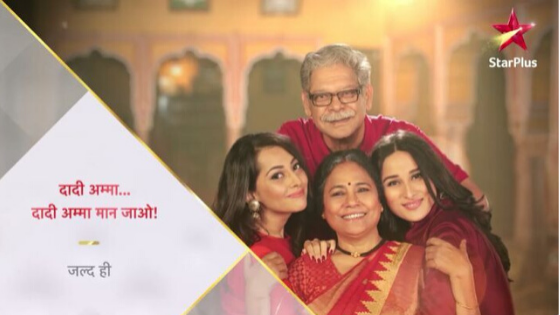 Rajshri Production is coming up with an offbeat plot with Dadi Amma Dadi Amma Maan Jao serial on Star Plus. The upcoming serial has senior citizens lead characters with two young girls.

Basically, the serial has a story revolving around four people: two young girls and their grandparents.

Lead roles in the serial are played by the following persons:

Upcoming Star Plus serial is a story of two girls and their grandparents. Both girls are filling colors in their grandparent’s life. The trailer represents the life of 75 years old kids and young girls. The Daddi amma is wearing the stilettos as part of the preparation of their anniversary. Because she wants to look taller than the Dadaji.

While attempts to walking with the help of girls, she heard from her husband that she doesn’t do anything that may break your bones.

While talking to him she can’t manage to stand still and due to imbalance both of them fall. The girls enjoy the moment and laugh.

A fresh concept with a mixture of young and old age groups, This serial has strong chances of becoming one of the top channels of Star Plus.

The girls are very excited to celebrate their wedding anniversary and the couple is not much into it. It would be interesting to see all of them living in a family.

We hope you enjoy reading this article, Stay tuned for further updates of the serial…