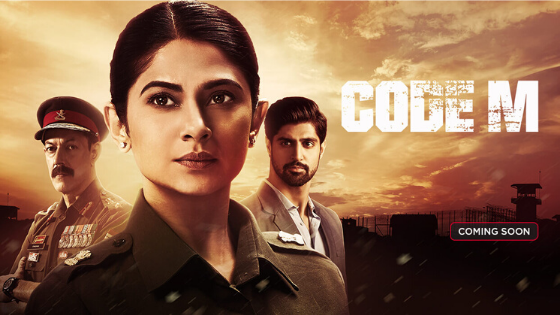 Code M a suspense thriller web series on ALT Balaji is storming the internet right away. Known for Jennifer Winget’s digital debut, Code M is a web series based on true events. Because of her absence for a long time on the silver screen, fans are very excited to see her on the OTT space, ALT Balaji. We are going to break the ice about the latest web series CodeM release date and the latest Code M Trailer.

ALT Balaji is the upcoming OTT platform with highly entertaining content. Its web series are always ready to give you goosebumps with a variety of genres. One of the is Code M, a web series with a high voltage suspense drama, where you can see Jennifer in the lead role.

A web series by Juggernaut Production and directed by Akshay Choubey, Code M will be released in January 2020. Presenting on Zee 5 and ALT Balaji Code M is a story of the investigation of an encounter.

Code M presents Jennifer Winget in the lead role of Monica. She is investigating a case as an army lawyer and involved herself in it. The well-known cast of Code M is as below:

Code M is in talks since Jennifer has posted the photo in uniform while shooting. Code M brings a piece of good news for fans of Jennifer that she will be seen in an entirely new Avtar with some stunt scenes in the web series.

The recently launched trailer of Code M is full of mystery and drama.it shows the true colors of the Indian army. The trailer begins with the hand over of the sensitive case to Monica (Jennifer Winget). The 2-minute 52-second Code M trailer is full of conspiracy and suspense. It shows the brave army lawyer who investigates the encounter details. Two victims Asif and Khalid & a slain soldier, Ajay died in this encounter. Media and locals believed it was a fake encounter and the army was in pressure to reveal the truth. While investing the case, she comes to know the untold secrets of the event. It is the real charm of web series. Code M release date is expected in January 2020 as mentioned above.

Jennifer has beautifully played the role of an army lawyer who gives her best to solve the case. In many scenes of Code M trailer, she is seen with weapons in her hand and performing outstanding to know the reality of the truth and trying to do her job. Her role is described in this dialogue:” Evry story has three dimensions, yours, theirs and the truth”. She does not demotivate by the hurdles even the fight broke out while her undercover investigation.

Definitely, Code M is a story of chasing truth and being neutral while the system expects you to become biased. The role of Rajat Kapoor is also highly interesting. The trailer has received high engagements in a short span, it is a sign of successful popular upcoming web series.