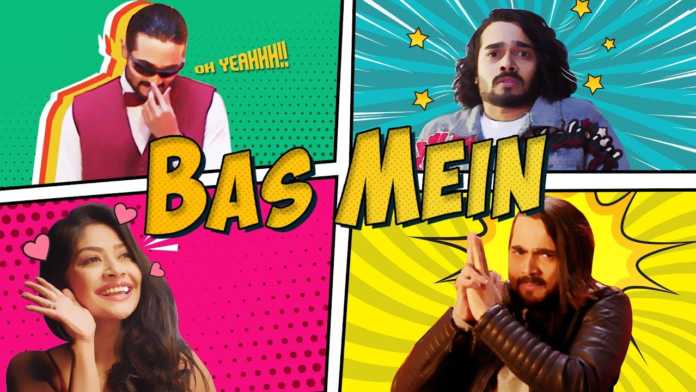 “Bhuvan Bam” the Delhi boy, many might have heard about this famous personality and a self-made brand. One thing that strikes our mind is that he is a sensational Indian YouTuber of the channel named BBKvines and the only Indian YouTuber to have 12+Million followers in the bucket. He has won already millions of hearts through his hilarious and jocular comedy. Now he is also known for his popular music which is self-composed, self-written lyrics and sung by self.

Music and Bollywood is his mainstream as he said in many of his interviews. So, Bhuvan bam after his successful hits beats like Safar, Sang-Hoon-Tere etc. Bhuvan bam released his next single “Bas Mein” on March 2nd, 2019 and now on charts like iTunes, Jiosavaan the previous songs were like Triumph. Bas Mein is completely disparate from other songs which were done till now.

It actually a club kinda song which came up with a very new theme digitally powered by One Digital Entertainment. A club vibe songs have become more popular these days after Bollywood entertained such songs in movies. Starring with Bhuvan Bam, a YouTube star and another face Sharmila Sharma where we have seen her in Dilliwood – 2017, Dulha wanted – 2018 and finally now in Bas Mein – 2019. The protagonist has stolen the song to the next level with her beautiful acts and dance. Here we could also see the dancers has also practiced a lot to make this song an evergreen one. Thanks to team Naach who made it happen and took the song to the next level.

The storyline of Bas Mein Song

The storyline of the song is something like, it’s about a girl who is trying to lure and beguile a guy. He tries to move and hovers around trying to hide or protect himself from her from enticing. The ascendancy and an added edge that made to stand out of the crowd is the rap which was performed in the song which is liked by his fans, followers and the general public who viewed this song which created tip tip barish environment with this magical beat. It has already crossed and touching nearly to 8.1+ Million views and wishing for even more. The editing is quite phenomenal, a great work by the DOP and direction.

As far as the videos, posts and much further news on digital, it’s like something is cooking behind the doors. Let’s wait and watch for the surprises as Bhuvan Bam is good at surprising his fans and audience. Hoping and wishing to see more such upcoming songs of Bhuvan Bam and wishing a great and happy success and may Kainadh (God) fulfills his wish for the entry in Bollywood.