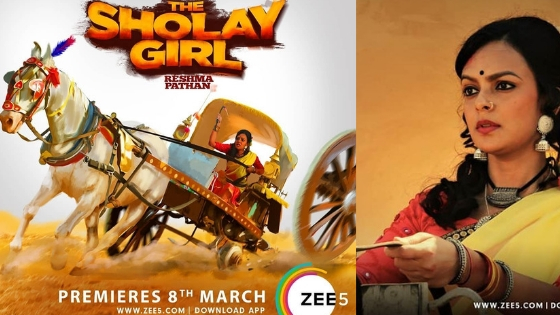 ZEE5 has portrayed the story and the journey of lesser known female icons Reshma. Do you know who Reshma is? Well, Reshma is India’s first stunt woman and to honor her and to make people know about her Zee5 has taken this step and coming with this fantastic ZEE5 Original.  Must be thinking that what is the name of this Streaming movie? Well, to uncover the excitement we are going to reveal the name of the ZEE5 Original.  And the name of this latest ZEE5 original online movie is The Sholay girl. In this movie, viewers will experience some of the Best stunts and action scenes performed by Reshma in several movies. Check out more details Cast, Story, Streaming from the below section of this article of DigiHunt.

The storyline of The Sholay Girl Web Series

The storyline of ZEE5 original The Sholay Girl is revolving around the life of India’s first stunt woman named Reshma. You must have remembered the iconic scenes of the movie Sholay Where Basanti was being chased by Gabbar Singh men. In that scene, viewers saw Hema Malini on the screen but in reality, Reshma was performing those stunts.  The concept of body Doubles is not new in Bollywood.

In the early 70s and 80s also hero heroines used body Doubles for performing the stunt based tasks. The iconic scene of Sholay where “Gabbar Singh’s men are chasing Basanti in Sholay and the wheels of her Tonga come off”  both also performed by Reshma for Hema Malini. The sprint she showed in the movie earned her the name of ‘The Sholay Girl.’  and now to make people know about the same this online streaming movie is released.  This 1 hour 25 minutes long movie viewers will see how this stunt lady made her own identity in the industry.

The online streaming of this movie has already been released on the ZEE5 original.  Viewers can watch the Sholay girl is a by visiting the online website or can also download the application in their devices. To download the Zee 5 application viewers need to visit the Google Play Store or Ios App store.

Hence this was all about ZEE5 original “The Sholay Girl”. If you have watched this latest steaming film then please share your experience with us. If you haven’t seen “The Sholay Girl” yet then we suggest you to just watch it once. For more related updates, stay connects with us.

Late Night Outing: Jasmine Bhasin, who came out of the house in a short dress late at night, was seen laughing out loud and...

From Akshay Kumar to Amitabh Bachchan, these celebs earn crores from brand endorsements, earn a lot

Why did Rishina take a drug test?

Nia Sharma’s Home Is An All White House With Statement Pieces; Inside Photos Are...

I Stand With Sonu Sood: When the Income Tax Department reached Sonu Sood’s house, his...