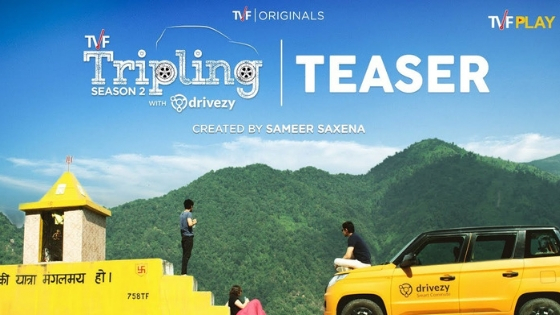 Three siblings Chandan, Chanchal, and Chitvan are coming to take you all on a hilarious ride of life.  This season 2 of the Tripling is produced under the banner of The Viral Fever (TVF) (media labs). In the first season, the siblings were seen having a ride from Rajasthan to Himachal Pradesh. In this season they will be seen as enjoying the ram rides in Kolkata and sitting by the Hooghly River.

The storyline of the tripling season 02 will revolve around the life of three cousins namely, Chandan, Chanchal, and Chitvan. Role of Chandan will be played by Sumeet Vyas and the role of  Chanchal will be played by Maanvi Gagroo), and Amol Parashar will be seen as Chitvan.

From the teaser, we get a glimpse of the story of Tripling Season 2. In the 44 seconds teaser, we saw three siblings in the car on a trip. Chitvan is one from them and humming his favorite song. Hearing him humming, the rest two siblings Chandan and Chanchal smile. We have also seen that this road trip will change the life of all the siblings. And at last, Chandan will write a book stating the story of their last road trip and then become a famous Author.  On the other hand, Chanchal will take her steps into the Political words but she is not happy because of the cotton sarees. And also the holier-than-thou avatar makes her more irritated. The last sibling, Yes, Chitvan is seen in trouble handling the media and cops. Like always Chandan is seen helping him to get out of the mess.

The star cast of The tripling season 2 includes the following actors:

As per the close sources, “The Season 2 of Tripling was to kickstart earlier. But the delay in the creative developments pushed the date further. Now, the shoot of Tripling is slated to start from May. The script work and readings with actors are already on.”

The teaser of the web series is also out. Viewers can watch the video from below given link:

While sharing the Teaser, TVF captioned: “Once upon a time, a beautiful baba, a madafaka, and a Queen went on an unplanned road-trip. And then they did it again! What has changed between Chandan Chanchal and Chitvan? Keep your eyes on the road as your favorite siblings are all set to reunite for another adventure!”