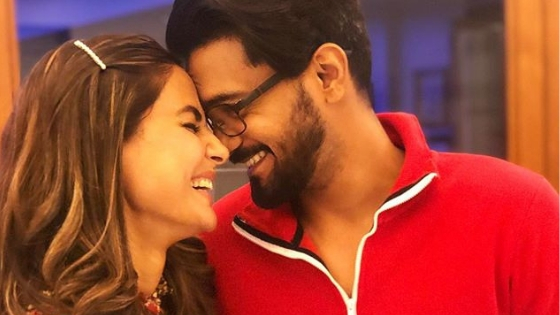 The famous celebrity dance reality show of Star Plus is coming back soon. Yes, Nach Baliye Season 9 is coming with a bang where celebrities will dance on the beats of judges. This time the show is produced by Salman Khan. Furthermore, Sunil Grover and television actor Jennifer Winget will be the host of the show. As per the recent sources, Kasauiti Zindagii Kay 2 actress Hina Khan and her boyfriend Rocky Jaiswal will take part on the show as contestants. But now it is confirmed that the news was fake.

As per Telly Chakkar, Hina said, “Yes, we are approached for Nach Baliye. However, we won’t be able to participate, as we both have packed schedules. I am busy with Kasautii Zindagii Kay and the movie schedule lined-up, while Rocky will soon fly to London for his next feature film.” After hearing this news, it is possible that Hina Khan Fans get disappointed but this is true. Furthermore, the details about contestants going to take part in the show are also confirmed.

Talking about the Nach Baliye Season 9 Judges then sources also revealed that Neha Kakkar, Katrina Kaif, Malaika Arora, Arbaaz Khan, and Shahid Kapoor and Mira Rajput were approached to be the Judges of this season.