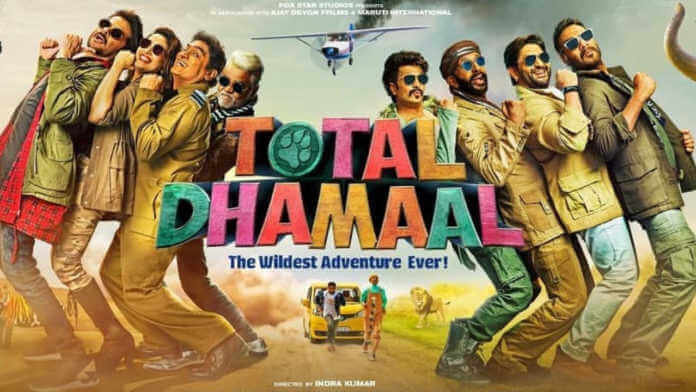 Another installment of comedy Drama movie Dhamaal titled as “Total Dhamaal” is all set to hit the TV screens. The Total Dhamaal Trailer is also out now. This Upcoming Bollywood film is starring Ajay Devgn, Madhuri Dixit, Anil Kapoor, Riteish Deshmukh, Arshad Warsi, and Javed Jeffery. Other than the above-stated stars, Boman Irani, Sanjay Mishra, and Esha Gupta are also part of this film. Total Dhamaal is the sequel to the 2011 film Double Dhamaal and the third installment of the Dhamaal film series.

Total Dhamaal is a Bollywood comedy film starring Ajay Devgn, Madhuri Dixit, Anil Kapoor, and many other stars. It is the sequel to 2011 film Double Dhamaal and the third installment of the Dhamaal film series. After a long time, viewers will enjoy the on-screen chemistry of Anil Kapoor and Madhuri Dixit.

Director Indra Kumar while talking about the Total Dhamaal Cast said: “It was more nostalgic as I was teaming up with Ajay, Anil, and Madhuri after a long time. There was no trouble getting any of the actors on board because their tracks had them laughing out loud. It took just one narration to get the cast in place. And as a director, I’ve played to everyone’s strengths.”

Finally, today the Total Dhamaal Trailer is released and as per the sources available, this comedy-drama movie will be released on 22nd February 2019. Earlier the film was set to release worldwide on 7 December 2018 but due to extended VFX work the release date has been pushed back to February 22, 2019

Well, what you think about the movie after seeing the Total Dhamaal Trailer. Share your views with us in below comment box.

Alia Bhatt To Jacqueline Fernandez- Bollywood Actresses Who Are Madly In Love With Their Cats;...

“Why are we not so quick to shame the rapists?”