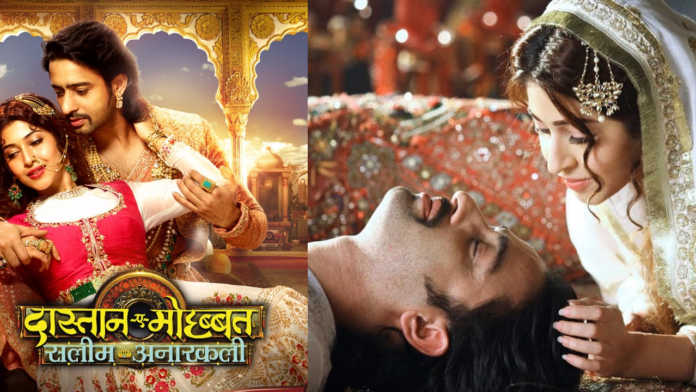 Confirmed!!! Dastaan-E-Mohabbat go off air!!! One of the popular shows of Colors channel is going off air soon.  Yes, we are talking about Dastaan-E-Mohabbat: Salim Anarkali. Due to bad TRP ratings and disappointing response from the viewers, the decision regarding pulling this show off air has taken.

Sonarika Bhadoria and Shaheer Emotional on shutting down the show

About shooting her last seen for this show of colors channel, Actress Sonarika (playing the role of Anarkali) get emotional. On her social media account, she shared an emotional message regarding Dastaan-E-Mohabbat go off air as:

On the other hand, Sonarika’s Co-Star Shaheer Sheikh (playing the role of Salim in the show) messaged regarding Dastaan-E-Mohabbat go off air saying that “Nobody is saying goodbye”.

Thereafter, Shaheer also posted a picture from the sets on his Instagram account. along with the posture he stated a caption as:

Well, Shaheer even expressed his displeasure as the show was pulled down and he did not get an opportunity to bid adieu to his cast and crew.

Talking about the Dastaan-E-Mohabbat go off air, Tansim (another Television actress in Salim Anarkali) “Honestly speaking, we actors were not officially informed about anything. We suddenly got to know of the time getting shifted. Later we were informed via a message about the show going off air. It was very disheartening to receive the message on the very first day of the New Year (1 January). The show had huge potential; it was such an expensive show and a beautiful looking one too. It is very sad that it is going off air. I feel bad for the Producers. This was one show where all actors were totally in sync and bonded well. We all wanted to be together for the longest time possible. We looked forward to be with each other. It was so much fun with the girls. It is so sad that we will not be together anymore.”

What do you think, is the decision of pulling Dastaan-E-Mohabbat go off-air is right or not?? Share your comments with us… For more updates, stay connected with us…