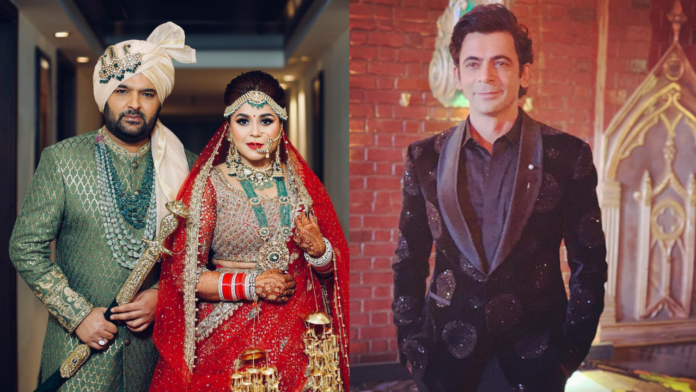 Sunil Grover wishes Kapil Sharma: Sunil Grover did not attend Kapil Sharma’s reception, but still, the actor-comedian make the first move and wishes he newlywed a happy married life through a tweet. Not only Sunil tweeted, but also Kapil Sharma replied to it stating that “He missed Sunil at the party”

At his Twitter handle, Sunil Grover wishes Kapil Sharma and wrote that “Wishing @KapilSharmaK9 and @ChatrathGinni a happy married life. May God give you happiness and togetherness always. Best wishes.”

Wishing @KapilSharmaK9 and @ChatrathGinni a happy married life. May God give you happiness and togetherness always. Best wishes 💐

Thereafter, Kapil Sharma Replied to his tweet as “Thank u so much paji.. we missed u .. love n best wishes always.”

A lot of popular names from the Televisions and Bollywood industry have attended in Kapil Sharma and Ginni Chatrath reception. Some of the famous names who were the limelight of party are veteran actress Rekha, Ranveer Singh, Deepika Padukone, Bharti Singh, Kirti Sanon, Kartik Aryan, and Kavita Kaushik among several others.

Kapil Sharma and Ginni Chatrath tied the knot on 12th December last year. The big fat Punjabi wedding took place in the latter’s hometown near Jalandhar. Kapil’s close friends from the industry and family members attended the wedding functions and wish the couple with a lot of blessings.

Talking about the Profession, after fighting with a hard time, Kapil Sharma is now back on Televisions with his popular show The Kapil Sharma Show. The first episode of “The Kapil Sharma Show “was featured with the presence of Ranveer Singh, Sara Ali Khan, and Rohit Shetty. Furthermore, Sunil Grover is also back to the small screen with his Comedy Television show ‘Kanpur Wali Khuranas’.