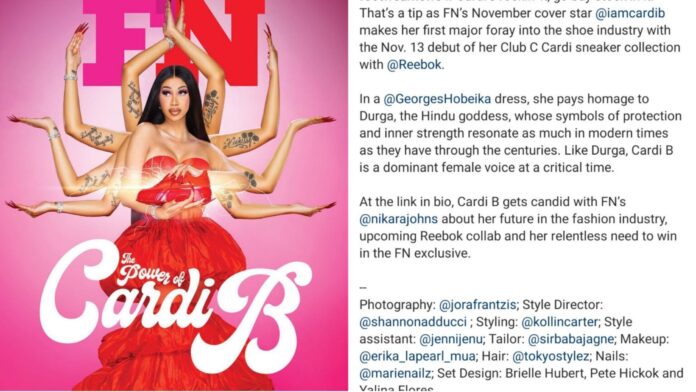 American rapper Cardi B has been in constant controversy. Recently, he had posted his half nude photo on his birthday celebration on Instagram. After this, she was heavily trolled. However, after realizing the mistake, he immediately deleted the photo and apologized. Now she seems to be caught in another controversy. This time the matter is a bit serious and people are getting angry on social media.

She has been accused of emulating people and making fun of Hinduism. The case is of a shoe advertisement. She has a shoe in her hands and is photographed posing like goddess Durga. People say she has insulted Goddess Durga of Hinduism.

In protest, Cardi deleted the photo and posted a apology video on her Instagram account. In the video, Cardi says, ‘Sorry guys. I didn’t mean to offend or disrespect anybody’s culture. I can’t change the passed but I’ll be more cautious for the future. Love you guys’

Even after deleting the photo and apologizing, the anger of the people is not diminishing. People say that making fun of and dissecting Hinduism has become a trend. The stars make fun of Hinduism whenever they want. They do not think at all before disrespecting the deities of the Hindus.

Zee5 has released the poster of its upcoming movie “Darbaan”