Home Bollywood LAXMII MOVIE REVIEW: HOW MUCH IT POUR ON AUDIENCE 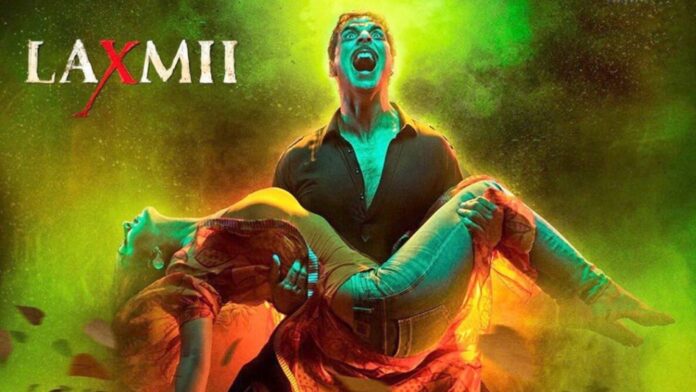 The wait is finally over! Laxmii is finally on the with all its fire. The most awaited movie of Akshay Kumar and Kiara Advani has been released in Disney plus Hotstar. The hype for Laxmii Bomb has set up a difficult bar to reach. Let’s find out what does Akshay Kumar‘s second venture on supernatural beings, apart from Bhool Bhulaiyaa, Laxmii has new to reveal.

Started with the glimpse of a deserted place, the movie has given out hints about the forthcoming series horrible incidents that are going to take place. But what about it being a comedy movie? You still have to wait upto a considerate amount of time to get a hold on the humour sequence. Still, then stay tuned to what happens next. The next sequence gives the humourous entry of Akshay Kumar, who then and there takes the famous challenge. It says, “Jisdin mere samne bhoot ayega toh maa kasam chudiya pehen lunga, chudiya!” This becomes the root of all the other things.

Amid the romance between Akshay Kumar and Kiara Advani, the supernatural entity took a grand introduction when Akshay Kumar and team went to play a match on the ground. Soon the story takes the supernatural turn. The rotting of the plant-root to the weeping sound at midnight, all the mainstream things started taking place in the paternal house of Kiara Advani. The scaring sequence went on for another few minutes, when finally after drinking the blood-soaked lemon-grass-tea, Akshay Kumar or Asif started incorporating a different personality and behaved like a transgender woman. This is the indication that Akshay Kumar has been possessed by the spirit.

The Story Behind The Story

The real action takes places when Laxmi jumps into the scene to take revenge. There takes a new turn as a set of new characters get introduced in the movie. Meanwhile, the family tries every spiritual method to get rid of the “Queen” that Akshay Kumar aka Asif has been transformed into. The story then gets back to its root cause. A flashback starts to gets played as the entity narrates the struggle it has gone through, while alive. Through a series of a tragic death, Laxmi became the spirit seeking revenge for her betrayal and death. However, the character of Asif was finally saved from the hands of the entity, after a few incidents that followed.

The leading roles have been played by Akshay Kumar and Kiara Advani was featured in the skin of his wife. Sharad Kelkar played the role of Laxmi when she was alive. Kiara Advani‘s family members included Ayesha Raza Mishra and Rajesh Sharma as her mom and dad, respectively. Apart from them, the negative role casts Tarun Arora as Girja.

With a tinge of a few social constraints like inter-caste marriage, the right for transgenders and the blind-faith on supernatural existence, Laxmii has tried its best to talk about the negative associations. However, it might not have lived upto the expectations of the audience.

The movie has been directed by Raghava Lawrence, as his Bollywood debut which is the official remake of Telegu movie Kanchana. Though it has its saga movies too. We are yet to get any notice if Laxmii will cover any sequence movies or not.