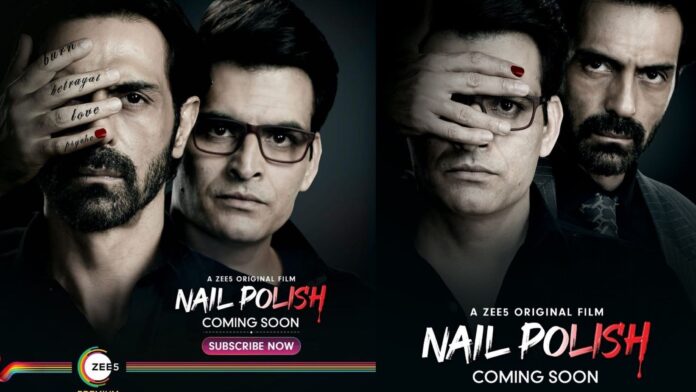 Zee5 is coming up with the film Nail Polish with a scheduled premiere of January 1. Nail Polish is a fast pace courtroom drama with a hypnotic mystery storyline. Zee5 is surely setting up the bars with each of its new releases. It has been serving the audience with some of the best thrillers in the webspace.

Zee5 has thrown some light on the characters who are in the lead roles. Arjun Rampal in the film plays the role of a high-profile defense lawyer.

For those who don’t know, Nail Polish is Arjun Rampal’s second project with Zee5. Before this, Arjun was also seen in the Zee5 original web series The Final Call, playing the character of a pilot. Manav Kaul, on the other side, will be seen as an accused killer. His first look is also out on social media. Anand Tiwari, in the role of a lawyer, will act opposite Arjun Rampal.

Nail Polish is a fast-paced courtroom drama with an additional hypnotic mystery angle in it. Nail Polish is the story of a man who is accused of killing two migrant children but the story turns compelling during the courtroom session. During the trial, the accused shows different personalities, which makes it difficult to judge the actual scenario. He acts in two different personalities.

Arjun Kapoor in a statement said “After a fantastic run with The Final Call to collaborate again on a ZEE5 project was an easy decision to make. Especially when the project is Nail Polish. Yes, the script is as intriguing as the title. With a wonderful cast combined with very addictive energy and clarity of the director Bugs Bhargava Krishna, this is a project that is extremely promising and allows everyone to push one’s limits to a level, that hopefully shall transform itself into something very very special.”

did you know? Dilip Joshi was about to reject the show!

This Photoshoot Of Sharmila Tagore Had To Be Removed Overnight