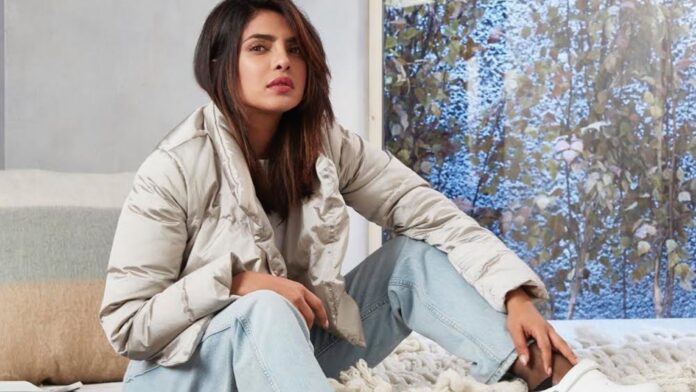 Priyanka Chopra announces her new Hollywood project with actor Sam Heughan and Grammy-winner Celine Dion. The film is reportedly titled Text For You.

“So excited to kick start this amazing movie with such incredible people! Jim Strouse, Sam Heughan, Celine Dion. It’s my honour. Let’s gooooo!” wrote Priyanka Chopra while sharing an article from Deadline on her social media.

Text For You is a remake of a German movie released in 2016, SMS Fur Dich. Both the movies have adopted their storylines from the novel by Sofie Cramer of the same name. The title Text For You is well suited, as the movie depicts the story of a girl who is heartbroken after her fiance’s death. To ease her pain, the girl starts sending texts on her fiance’s old cell.

It turns out that in a blind hope to connect with her fiance, she connects with a man across the town with the same sort of aching heart. The cell number got reassigned to this man, and now he was receiving all the romantic texts.

Priyanka Chopra has been cast opposite Sam Heughan as the protagonist of the film. On the other side, Celine Dion, known for her epic Oscar-winning love ballad “My Heart Will Go On” has a unique role in the movie as her music encourages the two heartbroken people to move ahead with their lives. The song “The Power of Love”, comes as a light of hope to both of them to make them believe that they can give love another chance in their lives.

Meanwhile, Priyanka Chopra is yet again enjoying the support of her biggest cheerleaders on Instagram. “You are the best,” wrote Pee Cee’s mother Madhu Chopra, while husband Nick Jonas posted a fire emoji, welcoming the big announcement.

Vidhi Pandya says, ‘We all take care of Afsana Khan, but she behaves strangely.’

Williamson ruled out of New Zealand team for B`desh Tests, Latham to lead