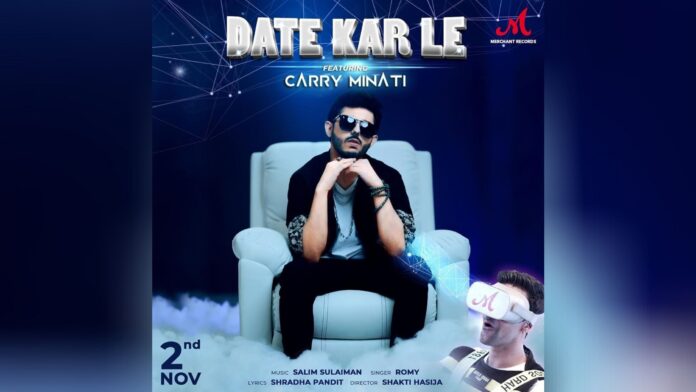 Carry Minati is all set for their upcoming new rap song “Date Kar le“. Salim-Sulaiman are one of the most iconic duos of the Bollywood music industry with many songs like “Qurban Hua” credited to their name. The duo has worked for a long time and has created a respect for the brand that they have become. Not long back, the duo launched Merchant records to promote rising music talent of the Nonbollywood genre.

For the latest rap song “Date Kar le”, they have collaborated with the multi-talented YouTuber Carry Minati. Carry, who makes vines and funny videos on YouTube turned into a rapper for his last rap videos, one of them was called “Yalgaar”. Carry had been a part of the Youtube vs Tiktok controversy. Yalgaar crossed and 176M views on youtube.

The song’s poster is released on social media handles. The song is going to release on November 2. He is very excited about this as well as fans. the song is sung by Romy and lyrics by Carry Minati.

In Pics: From Sonam Kapoor to Soha Ali Khan, these B-town beauties wore very expensive dresses at their wedding, knowing the price will blow...

Late Night Outing: Jasmine Bhasin, who came out of the house in a short dress late at night, was seen laughing out loud and...

Why did Rishina take a drug test?

Meet Milind Soman’s Sisters. See Pics From The “Only Festival” He Celebrates