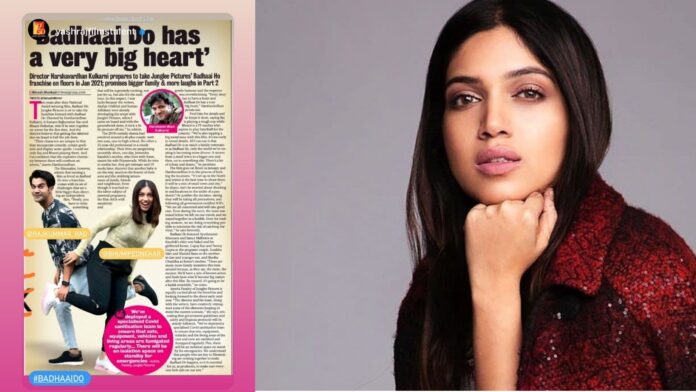 Actress Bhumi Pednekar, who starred in the sequel to Nation Award-winning film ‘Badhai Ho’ directed by Harshvardhan Kulkarni, has already started preparations for a family drama. Bhumi posted on her Instagram story today, the actress took a selfie as she began preparing for the role of a PT teacher in the film Badhai Do and wrote, “Beg on the first day #Badhaido begins preparation”.

The film Badhai Do has been postponed due to the COVID-19 epidemic. Earlier Bhumi and Rajkumar took their social media to announce their upcoming film. Bhumi captioned the post, “Aye @RajkummarRao time to say #BadhaaiDo, let’s meet on the set, January 2021. Bring it on @JungleePictures” There is a picture of his co-star Rajkumar Rao where, as the movie title, both are seen shaking hands to congratulate each other.

“I have played many different roles previously in my films, but my character in Badhaai Do is truly special. I loved the script from the first narration itself as the subject is very relevant and is packaged in the most entertaining way. This is the first time I will be working with Rajkummar, and I am super excited as we begin our shoot soon. ‘Badhaai Ho’ has been one of my favorites, and it feels amazing to take this franchise forward”, Bhumi had earlier told in an interview.