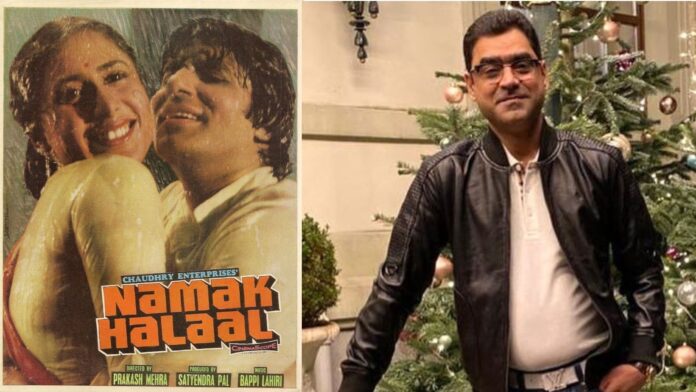 Murad Khetani who is famous for his production in Shahid Kapoor’s Kabir Singh bought rights to the original 80’s hit movie “Namak Halal” who was a superhit film of Amitabh Bachchan, Smita Patil, Shashi Kapoor, and Parveen Babi. It is heard that soon we will going to have a remake of that film.

The producer said, “I have bought the rights to remake Amitabh Bachchan-Shashi Kapoor-Smita Patil-Parveen Babi starrer Namak Halal. It’s a film that has been loved across generations and by people of all ages. We are working on the script at this point. We haven’t approached any actor or director for the film as of now. We will work on the casting once we lock the script completely.”

According to a source, “Big B’s Namak Halal will now be remade. Murad Khetani has bought the rights to the original and is currently putting it in place.”

Namak Halaal was one of the biggest successes of Amitabh Bachchan in his career. Amitabh was there working for Shashi Kapoor in his hotel. Where we can find Smita Patil as his beloved. Shashi Kapoor was the boss and Parveen Babi acted on the opposite of him. Even in that film actors like Wahida Rehman, Om Praksh were acted on that film.

The casting is not yet revealed. But for sure this great history is going to give Bollywood a sack of entertainment again.