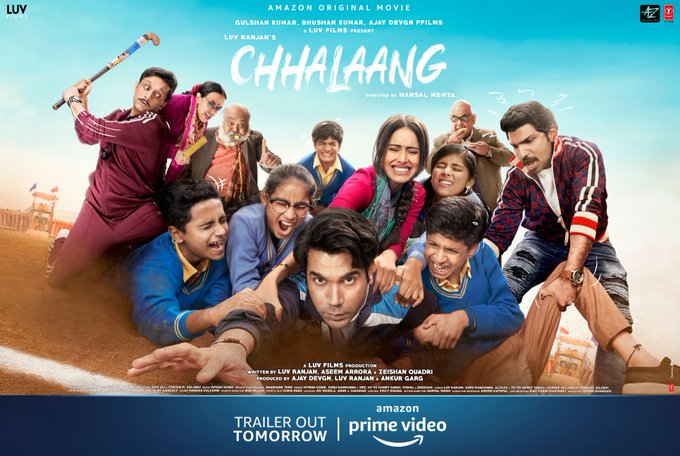 Amazon Prime Video launched the poster of their upcoming film “Chhalaang” today on their Instagram handle featuring Rajkumar Rao, Nushrat Bharucha, Mohammad Zeeshaan, Jatin Sarna( Sacred games fame), Saurabh Shukla, and Satish Kaushik. The film, directed by Hansal Mehta, is expected to go on floors on 13th November this year and the trailer for the same will be dropped by tomorrow.

The poster looks quite fun and seeing the cast, expectations are all up for this one. The film will be released on the online streaming platform Amazon Prime on November 13. Stay tuned to know more.

Director of the film Hansal Mehta announced the film on 10 August 2018 with the title “Turram Khan” and Rajkumar Rao in the lead role opposite Nushrath Bharucha In 2019, Mohammed zeishan Ayyub joined the film to portray a supporting role. Principal photography for the film began in late-2018. In June 2019, Rao and Mehta, along with Ayyub, were spotted filming a kabbadi scene in Mumbai’s film city.

In December 2019, the title of the film was changed to “Chhalaang”, which means “Jump”. The plot is set in a small town of Uttar Pradesh. The film is set to release during Diwali 2020 on Amazon Prime Video.